PewDiePie is under fire for posting a meme mocking Demi Lovato for her alleged overdose. The image, which has now been deleted, but can be seen in the screenshot below, is in the form of a comic strip, and shows a child asking their mother for money to buy a burger. In the end, though, the child uses the money to buy heroin. The meme features Demi’s face in place of the comic drawing of the child. As we previously told you, Demi was rushed to the hospital after allegedly suffering a drug overdose on July 24. It was originally reported that she OD’ed on heroin, although since then, TMZ has reported that was not the alleged drug she was using. FOR MORE ON DEMI, LISTEN TO OUR PODCAST HERE.

It didn’t take long for people on Twitter to notice PewDiePie’s insensitive post, and fans have been slamming him on the social media site ever since. “He’s not funny at all unless you think racism and homophobia and making fun of mental illness/addiction is funny,” one person wrote. “sorry but if you stan him you are part of the problem.” Another added, “Wait, so PewDiePie criticized Logan Paul for being insensitive (which he is) but here he i making fun of Demi who overdosed on drugs? No wonder only 12 year olds watch him.”

Thousands of tweets flooded in about the meme, prompting PewDiePie to delete it and issue an apology. “Deleted meme,” the YouTube wrote. “I didn’t mean anything with it and I didn’t fully know about the situation. I realize now it was insensitive, sorry!” 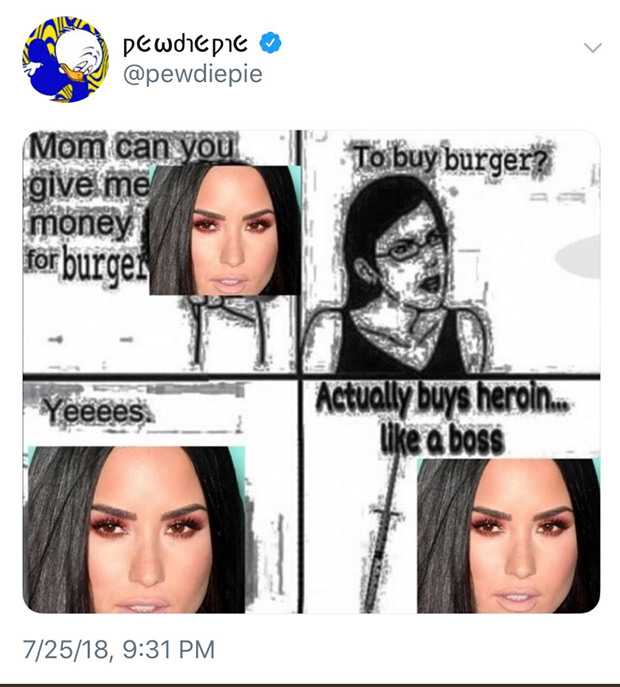 Just a few hours after Demi was hospitalized, her rep confirmed that she was awake and with her family. Her ex-boyfriend of six years, Wilmer Valderrama, was spotted visiting her in the hospital on July 25, and there has been an outpouring of love trickling in from celebrities, including Kim Kardashian, Nick Jonas and Joe Jonas, online.

UPDATE: PewDiePie has since apologized for the Demi Lovato meme, which outraged her fans. On July 26 he tweeted, “Deleted meme. I didnt mean anything with it and I didnt fully know about the situation. I realize now it was insensitive, sorry!”