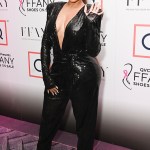 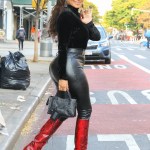 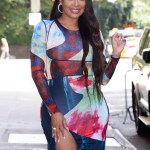 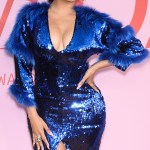 La La Anthony is red hot on the set of Drake’s ‘In My Feelings’ music video! The actress revealed a first look of her rumored role as ‘KeKe’ while filming with Drizzy in New Orleans! — Check out the sexy snap!

It looks like Drake, 31, found his Keke! La La Anthony, 39, seemingly let the cat out of the bag that she’s starring as the famous “Keke” in Drizzy’s forthcoming music video for his No. 1 hit, “In My Feelings”! The Power actress posted a sexy photo — dressed in an all red spandex getup — while on set in New Orleans. “HEYYY KEKE….DO U LOVE ME?,” La La captioned the sultry snap with a bunch of wide-eye and monkey emojis.

She stunned in high-waist red spandex biker shorts with a matching sports bra, which showed off ample cleavage. La La’s look was topped off with the coolest hightop sneakers with straps and red and blue stripes. Her hair was crimped and pushed to one side, as she posed next to a trailer on set. It was just one day before La La’s photo reveal that video footage surfaced, of her on set of the music video. — That’s when rumors began to swirl that La La was Drizzy’s Keke in the highly anticipated video.

We’re wondering just how many outfit changes La La has in the upcoming video, seeing as she was dressed in a completely different outfit in the first glimpse of her on set. In the video footage (mentioned above), La La appeared have on a forest green tank top with gold hoops, with her hair up in an old school side ponytail. Drake, La La and more of his crew and dancers have been in New Orleans, Louisiana, all throughout the month of July, filming the “In My Feelings” music video. 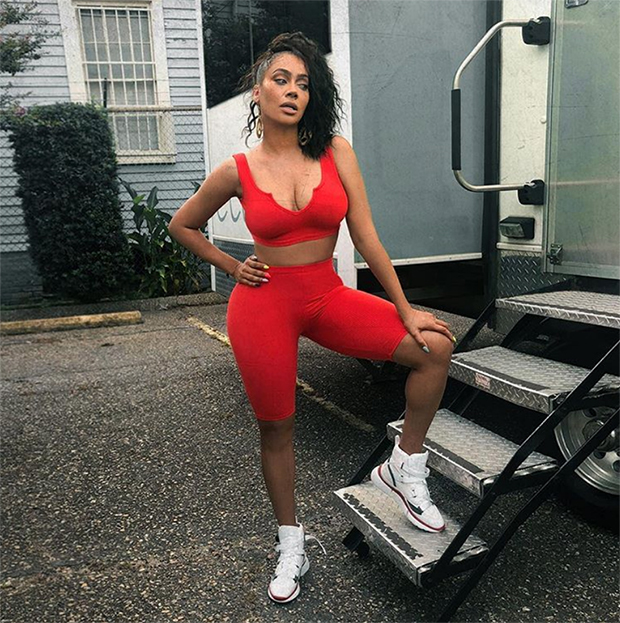 La La Anthony poses on set of Drake’s ‘In My Feelings’ music video on July 25, 2018. The actress is believed to be starring as ‘Keke’ in the forthcoming visual.

It’s unclear when the music video will drop, but the filming is under way. Fans even captured videos from the set on July 8, where a crew of male and female dancers were dancing to the track, including one half of City Girls, the Miami rap duo who are featured on the track. Jatavia “JT” Johnson was unfortunately not present on set, as she is currently serving a jail sentence for fraud charges.

The rapper‘s hit is off his latest double album, Scorpion, which features 25 tracks. So far, the album — which was released at the end of June — has already gone platinum, with numerous tracks from Scorpion holding Top 10 spots on the Billboard Hot 100.