This is not a drill! The only thing that would make Orlando and Katy a cuter couple than they already are is a baby — and it sounds like Orlando is all for the idea.

Instagram’s new Ask Me Anything feature may be the best thing the app has come up with! Without it, we may never have known that Orlando Bloom, 41, wants more kids. Although he has a son named Flynn with his ex Miranda Kerr, the actor has been dating Katy Perry, 33, on and off since 2016 — and now it’s looking like they may be ready to take things to the next level. Well, Orlando is at least. After posting on his Insta story, “I’m waiting to go to set ask me a question,” one fan asked if he wanted to have kids. His answer? “Yes I love being a dad.”

As if his answer wasn’t sweet enough, Orlando even posted it with a smiling selfie. Now if that big grin doesn’t make it clear how he feels about having more kids, we don’t know what does! Wondering if Katy feels the same? Good thing a source close to her told Hollywoodlife EXCLUSIVELY, “Katy doesn’t want to make things very secret with Orlando Bloom, and if he wanted to marry her and have children, she would be all in. She has jokingly said to friends she would be a baby-making machine for him, but it is something that is drenched in truth.”

We’ll just let that sink in for a sec… These two are both excited about starting a fam — so what are they waiting for? We hope to see a baby announcement from Orlando and Katy sooner rather than later. 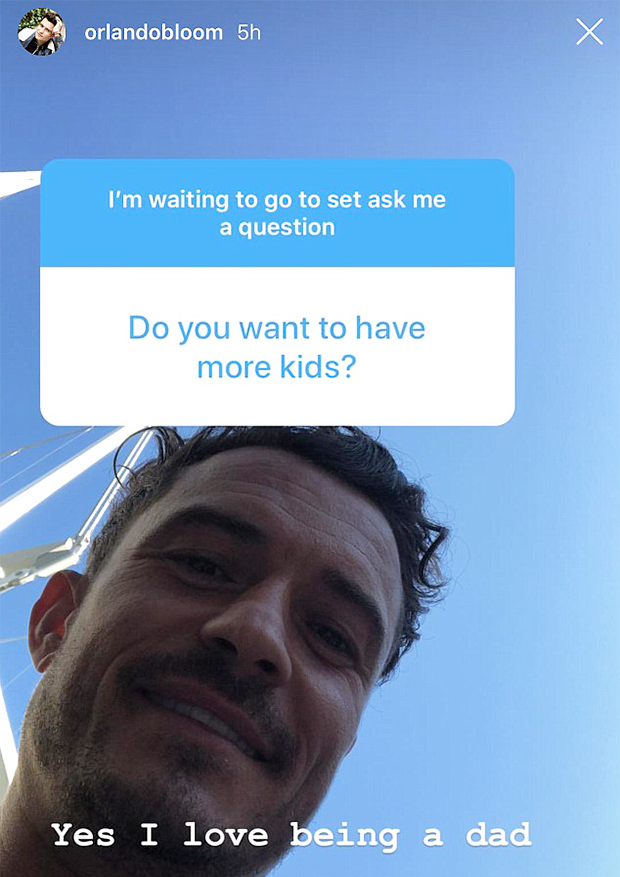 With rumors flying around that Beyonce and Jay-Z are expecting a fourth, not to mention that Meghan Markle and Prince Harry are trying for their first, it sounds like there are going to be a lot of cute kiddos running around this time next year. Fingers crossed one of them is Orlando and Katy’s!