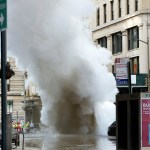 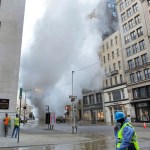 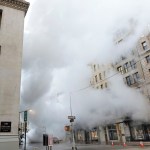 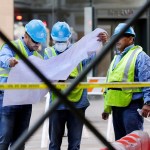 New York City’s fifth avenue was rocked by a huge explosion at 6:40 am this morning, as a burst steam pope shot debris 200 feet up into the air, terrifying city residents. Was anyone injured?

At least five high-pressure steam pipes exploded on Fifth Avenue at 21st Street in the Flatiron District of Manhattan on July 19, according to the New York Post. Several buildings had to be evacuated immediately. The explosions sent massive plumes of scalding steam up towards the morning sky. Debris, including chunks of asphalt, littered the nearby streets and cars that were parked by the explosion were covered in mud. The streets were closed around the explosion, which left a massive crater in the streets. As of publication, no major injuries have been reported — which is a miracle! Had this explosion taken place an hour later, during the morning rush-hour, it could have seriously killed so many people.

The New York Fire Department, according to The New York Times, cautioned residents near the explosion to “shelter in place” while the assessed the damage, confirmed that no one was hurt or killed. 138 firefighters and 33 NYFD units had arrived on the scene as of 8 AM ET, with police shutting down traffic on major thoroughfares. The Metropolitan Transportation Authority also said that subway trains were being rerouted to avoid the area, making an already stressful commute even worse.

“My whole body was shaking, I didn’t know what was going on at the moment,” one man told NBC New York. So, what happened? Con Edison, which operates the system of steam piping under the streets of Manhattan, will have to figure out what caused the massive explosion. In the meantime, the utility company said it was conducting environmental testing for asbestos and other contaminants. ConEd also warned anyone who was exposed to the debris that they should to bag their clothes and take a shower. People near the area were also seen wearing masks, taking the necessary precautions to not inhale any potential contaminants.

What is going on in #Flatiron #NYC?! pic.twitter.com/mkE7Pkfm5x

This explosion has some eerie timing, as the blast happened almost 11 years to the day of a similar steam pipe explosion near Grand Central. The rush-hour explosion, on July 18, 2017, shot debris 40 stories into the air! 45 people were injured and one person died (from a heart attack) due to the explosion. If that doesn’t creep you out, this explosion is about two blocks where a major water main ruptured in 1998, causing a massive sinkhole that resulted in a gas line bursting. Despite fire being shot into the air, no one was hurt. Sadly, the same couldn’t be said when a steam pipe in neighboring Gramercy Park burst in August 1989, as three people – including two Con Edison workers – were killed.