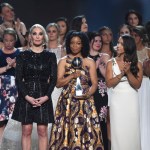 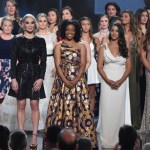 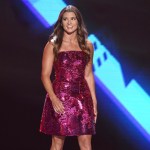 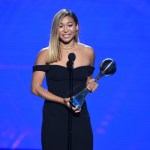 Danica Patrick brought the laughs as the ESPYS’ first female host! And, it wouldn’t be an entertaining night without a Trump diss, right? Danica roasted Trump after he appeared to believe Putin’s denial that Russia interfered with the 2016 election.

From hysterical callouts, to athlete-aimed disses, Danica Patrick, 36, let her sense of humor shine at the 2018 ESPY Awards, which took place at Microsoft Theater in Los Angeles on July 18. The former race-car driver, who is the show’s first female host, took aim at President Donald Trump, 72, admitting that he did nothing but focus on “pleasing” Russian President Vladimir Putin, 65, rather than calling him out for interfering with the 2016 election, per the U.S. intelligence community’s conclusion. “I haven’t seen a Russian this pleased by Washington until… a few days ago,” she said, implying Putin and Trump’s meeting, which took place on July 15. Patrick’s diss was about Trump and Putin’s sports memorabilia exchange, where they swapped jerseys during their meeting. — Trump presented the Russian leader with a Alexander Ovechkin, 32, Washington Capitals jersey, and a hockey puck. In return, Putin gave Trump a soccer ball from the World Cup, which Russia hosted this year.

Ahead of the awards show, Patrick described her hosting style as “apologetically sarcastic,” and, she was right! Patrick roasted sports’ biggest stars from all across the board, from LeBron James, 33, and his hair, to Ben Simmons‘ new romance with Kendall Jenner, 22. Before she took the stage at the ESPYS, Patrick revealed that she recorded both live and pre-recorded skits ahead of the show, which included costumes, wigs and multiple characters!

To prepare for her big gig, Patrick did her homework. — She watched several past ESPYS hosts’ performances and even had a conversation with actor Rob Riggle, 48, who hosted in 2012. “Drake and Justin Timberlake aren’t calling me and telling me how it’s going to go,” she told For The Win of the show’s other past hosts, jokingly adding, “We don’t have each other’s phone numbers.”

She explained: “So it made me feel better to think, what do I love about sports? What’s important to me and what makes me love the ESPYS? And then incorporate that into the show, and let it be in my voice and let it be my comedy, my humor level.” And, she certainly delivered the laughs!