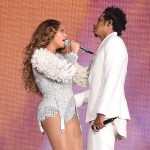 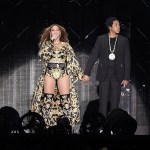 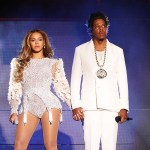 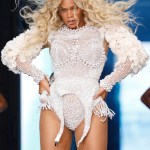 Could baby number four be on the way for Queen Bey? The singer’s fans seem convinced she is once again expecting! See their tweets on the matter and Beyonce’s slim-fitting bodysuit below!

During a July 15 performance in Paris, France, Beyoncé, 36, was absolutely glowing! The singer looked phenomenal as she took to the stage in a chic white bodysuit, and a pair of denim shorts. Over her shoulders she slung a colorful sequin jacket, as she effortlessly danced around the stage. Despite this – fans were completely convinced: Bey is preggers again, and they were not afraid to let their opinions be heard.

Members of the Beyhive did NOT hesitate on calling their queen out via social media. In a series of tweets, fans demanded the singer to come clean about her potential baby news. “so when beyoncé gonna tell us she pregnant. i’m waiting …” said one fan on Twitter. “Naw Beyoncé is really pregnant again omg. That’s so beautiful but damn sis MORE?” exclaimed another. It seems like fans really have their minds made up, but let’s not get too far ahead of ourselves, Beyoncé has YET to comment on the news herself at all! If the singer isn’t pregnant, she’s definitely letting this rumor ride this wave pretty far.

This wasn’t the only recent instance from Beyoncé that had fans spouting pregnancy prophecies. In a fan video posted on July 8, Bey can be seen standing onstage rubbing her belly while performing at a concert. Hmmm – seems like a move from a mother-to-be if we’ve ever seen one! Then, just several days later, Beyoncé whipped an ultra flowy dress out of her closet….you know, the kind you throw on when you have something to hide. Very suspicious! 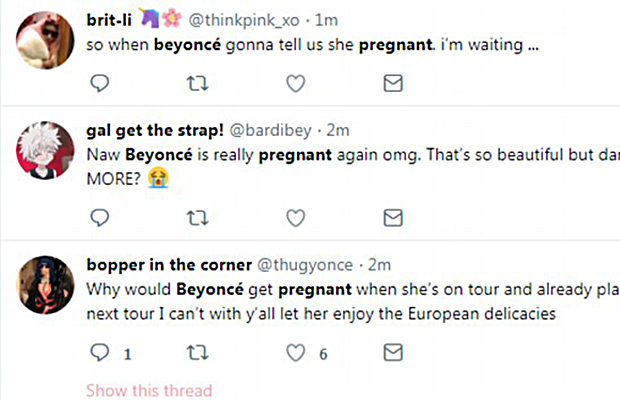 If Beyoncé did have another child on the way, it would be her fourth one, and a very close consecutive to her last time giving birth! Beyoncé welcomed twins, Rumi and Sir Carter into the world on June, 13 2017. This close succession of pregnancies seems to have fans confused, especially since Bey is currently on a joint tour with hubby Jay-Z and has live shows lined up for months to come! Hey, maybe since the two have been spending nearly every night together on tour, this was a surprise for them too!