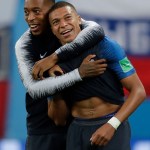 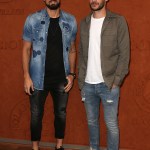 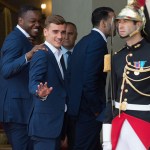 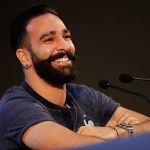 France is gearing up to play against Croatia in the FIFA World Cup final on July 15! To prepare for the big game, we rounded up pics of the hot soccer players from the French team! See them here!

The 2018 Fifa World Cup will come to an end on Sunday, July 15 when France and Croatia fill face off in soccer’s biggest game. But before the two teams come head to head at the Luzhniki Stadium in Moscow, Russia, we should get to know a little bit more about the French men who will be on the soccer field.

Even if you’re not the biggest soccer nut, you can still enjoy the game. Why? Well, because France’s team is stacked with good looking dudes. One of the hottest players is Olivier Giroud, the team’s center-forward. He’s got a bit of a David Becham vibe going on, which is great considering Becks retired from the sport. Unfortunately, Giroud hasn’t really been putting his best foot forward this tournament.

Out of the entire 412 minutes of game time during these finals, Giroud has yes to make a single goal. However, he’s not too concerned about it. “When you are a striker like me, you always play for the teammates,” Giroud told The Guardian. “Obviously I prefer to have chances and score but, if I can make space for the others, I always try to choose the best option for the team. That’s the main thing. When France were world champions in 1998 I think [Christophe] Dugarry scored one goal and [Stéphane] Guivarc’h not at all. If we are world champions without me scoring, I don’t mind. It means, if I’m on the pitch, the boss thinks I can help the team. I’ve got my part to play.”

He’s got a good point! The rest of his teammates also deserve to shine, and you can see that happening in our gallery of the hunky players above! Go on, get clicking!