Drake is crushing on former ‘Degrassi’ co-star Miriam McDonald after did a super sexy dance to his song ‘In My Feelings’ for the new viral dance craze #DoTheShiggy. We’ve got the video.

#DoTheShiggy has become 2018’s version of the Mannequin Challenge, as everyone is doing the super sexy dance set to Drake‘s “In My Feelings.” The videos are a viral sensation and Drizzy’s former Degrassi co-star Miriam McDonald caught the singer’s attention as she shimmied, shook her booty and looked super fine putting on her best moves. The 30-year-old posted the video of her doing the Shiggy to her Instagram account on July 10 and Drake, 31, couldn’t look away. The two co-starred on the Canadian TV high-school based hit in the early aughts and the rapper commented “Man, I dreamt of this as a kid.” HAH!

Miriam was the lead on Degrassi: The Next Generation as Emma Nelson opposite Drake’s Jimmy Brooks from 2001-2009. No doubt he crushed hard on Miriam as a teen and now he’s getting the ultimate reward with her doing the super sexy Shiggy to his own music. The gorgeous blonde looks ultra hot in a pair of skin tight jeans and a cleavage baring black tank top as she works it to Drake’s song.

Even Drizzy’s fans applauded his comment to Miriam’s get down, writing in the comments to her video. One person wrote “@champagnepapi oh I bet you did she is the hottest chick you grew up with after all.” Another added “@champagnepapi so did I! An Emma/Jimmy ship?! This is what 8th grade dreams are made of.” Drake just reunited the majority of the cast of Degrassi for his “I’m Upset” video, and of course Miriam was part of it. 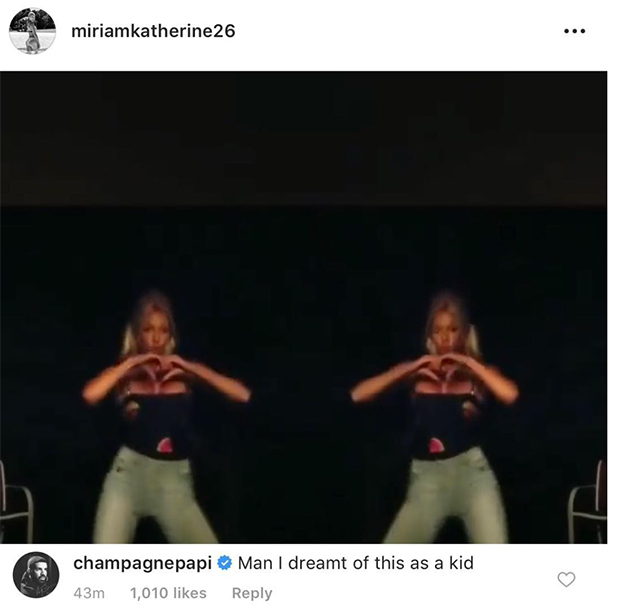 So many stars have already got in on the #DoTheshiggy craze that’s gone viral. Russell Wilson and Ciara did the sexy dance while on a second honeymoon in South Africa on a picturesque overlook above the ocean in Cape Town. New York Giants wide receiver Odell Beckham Jr. got down doing the dance on his IG on the Fourth of July. This Is Us star Sterling K. Brown did the dance with wife Susan Kelechi Watson in an adorable IG video on July 10, hopping out of their golf cart on a studio lot and busting out moves on their first day back filming season three of the NBC hit!