It’s official! Justin Bieber has confirmed he is engaged to Hailey Baldwin and is pledging that the two will have a healthy and stable marriage. We’ve got his big announcement.

Justin Bieber just confirmed his engagement to Hailey Baldwin in the most romantic Instagram post. Speculation had been swirling ever since the 21-year-old model was photographed with a giant $500K diamond ring on her hand while the couple vacationed in the Bahamas on July 8. No need to guess anymore if this was just a publicity stunt because the 24-year-old singer just revealed Hailey is the woman he intends to spend the rest of his life with. In a lengthy and romantic Instagram post on July 9 the Biebs wrote:

“Was gonna wait a while to say anything but word travels fast, listen plain and simple Hailey I am soooo in love with everything about you! So committed to spending my life getting to know every single part of you loving you patiently and kindly. I promise to lead our family with honor and integrity letting Jesus through his Holy Spirit guide us in everything we do and every decision we make.”  Yes, he’s already planning on having babies with Hailey and having a family together.

“My heart is COMPLETELY and FULLY YOURS and I will ALWAYS put you first! You are the love of my life Hailey Baldwin and I wouldn’t want to spend it with anybody else. You make me so much better and we compliment each other so well!! Can’t wait for the best season of life yet!” he continued. 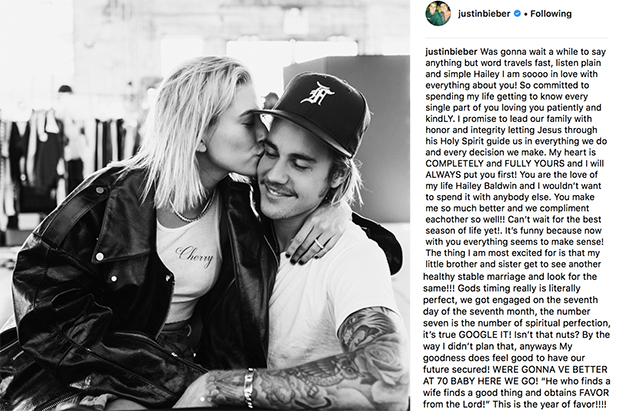 “It’s funny because now with you everything seems to make sense! The thing I am most excited for is that my little brother and sister get to see another healthy stable marriage and look for the same!!! God’s timing really is literally perfect, we got engaged on the seventh day of the seventh month, the number seven is the number of spiritual perfection, it’s true GOOGLE IT! Isn’t that nuts? By the way I didn’t plan that, anyways My goodness does feel good to have our future secured! WERE GONNA BE BETTER AT 70 BABY HERE WE GO!” he concluded. In less than an hour his post got over 3.3 million likes so fans are totally on board!

The pair briefly dated in early 2016 and just rekindled their romance in June of this year. They’ve been joined at the hip ever since and apparently five weeks was all Justin needed to decide Hailey was the woman he wanted as his forever partner. Jelena fans must be losing it as he just reunited with who everyone though was the real love of his life Selena Gomez, 25, in Oct. of 2017. They openly flaunted their rekindled love much to fans delight. Unfortunately they just broke up — again — in late winter of 2018 and a couple of months later he was back to dating Hailey, who he as now declared as the true “love of his life.” Ooooh, that’s gotta sting for Selena.