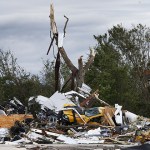 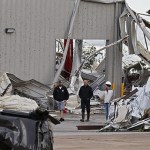 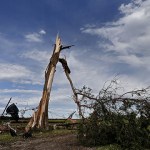 What is more shocking: that a tornado came out of nowhere to interrupt a hot dog eating contest at a Florida restaurant, or that everyone in the eatery managed to make it out in once piece!?

Call it a Fourth of July miracle. A small tornado, with winds at 70 to 80 miles per hour, formed near Tavares, Florida, around 2:30 PM ET. The freaky storm caused damage to local business, including the Fish Camp on Lake Eustis. 80 people were celebrating Independence Day inside the U.S. Highway 441 eatery, according to the Orlando Sentinel, when the tornado hit. “I look up and there’s stuff flying from the patio across and I’m like ‘what the heck just happened?’ ” said Robert Spittle, 41, a Pennsylvania native who was visiting the area.

“I was there with my family,” Thomas Wert, an attorney from Orlando, said in an email to the Sentinel. “We left about a minute before the roof was torn off on our boat. I saw the funnel cloud over the restaurant as we pulled away. It was definitely a tornado.” Jim Jordan, the owner of the restaurant, said the tornado “sounded like a 9.0 earthquake,” per Fox 35. “We all ducked and ran out of the kitchen!”

A person named Kara Sparks captured a video of what appears to be a funnel cloud and shared it to Facebook. The storm caused some other damage — wrecking a few other buildings while completely destroying another — but luckily, no one was killed or severely hurt! One person was scratched by flying equipment inside the restaurant, but other than that, everyone came out a-okay. However, there was one casualty: A hot dog contest was supposed to be held when the storm hit, per Click Orlando, but only one person showed up. That person was given three free hot dogs. So, win-win?

“Your Tavares Fire Department along with assistance from Mt Dora Fire and Lake County Fire responded to reports of an explosion,” the department said on its official Facebook page. “Once on scene it was determined that a possible tornado (wind event) touched down just behind Winn Dixie in Tavares. This event caused a warehouse type building to collapse, along with some damage to the Winn Dixie and fence line of Lake Frances Estates. Additional resources were called due to the building collapse and the need to search the building for possible occupants.

“Luckily the only rescue that was needed was to Ole Glory! During the event we were delayed to search the building due to securing down power lines and power to the structures. PLEASE! Stay away from active scenes especially when power lines are involved. No injuries reported. Have a safe 4th of July!”