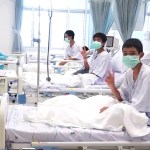 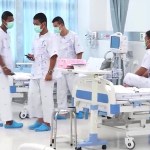 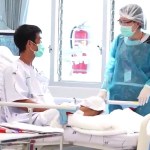 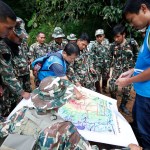 Although the 12 boys who disappeared with their soccer coach over a week ago have been found alive, they’re trapped in a Thai cave & will have to learn to dive or else wait months to be rescued from flooding waters!

After missing for 9 days, 12 boys and their soccer coach were found alive and trapped inside a Thai cave on July 2. The 13 individuals have received medical treatment and food, but the question is — how can they be rescued safely? The boys are stuck inside a flooded cave network, and will either have to learn to dive or will have to wait months for the caves to drain, according to CNN. Divers were able to reach the boys after 9 days, but more heavy rainfall could see water levels rise even more, thus threatening the air pocket where the group has taken refuge.

Attempts are currently being made to reduce the risk of over flooding by pumping water from the underground system. However, the water cannot be pumped fast enough. In the meantime, professional divers are highlighting how difficult any rescue would be by battling the difficult conditions in order to bring the boys food and medicine. “Now we have given food to the boys, starting with food that is easy to digest and provides high energy,” Thai Navy Seal Chief Rear Adm. Aphakorn Yoo-kongkaew told reporters at a news conference on July 3. “We have taken care of those boys following the doctor’s recommendation. So do not worry, we will take care of them with our best. We will bring all of them with safety.”

In addition to food and medical supplies, the boys have been given access to telephone lines so that they can talk to their families. For the time being though, the focus remains on building up the boys’ strength so that they can make the journey out. “We don’t have to rush. We are trying to take care of them and make them strong. Then the boys will come out to see you guys,” Aphakorn said.

At the same time though, rescue efforts do seem to have a timeline. After all, with heavy rain expected to continue in the next few days, rising water levels could actually force rescuers to act sooner rather than later. For now though, Captain Akanand Surawan, a commander with the Royal Thai Navy, said authorities would now supply the group with four months’ worth of food and also begin teaching the boys how to scuba dive. The reference to four months most likely means authorities are considering waiting until the rainy season ends in October to begin the rescue.

“We believe that there is only a short break in the monsoon and all feasible options for the rescue of the boys are being considered,” British Cave Rescue Council Vice Chairman Bill Whitehouse said in a statement.” Although water levels have dropped, the diving conditions remain difficult and any attempt to dive the boys and their coach out will not be taken lightly because there are significant technical challenges and risks to consider.” While diving may be the group’s best hope for escape, it’s still a very dangerous option. And the kind of diving these boys would have to learn to do is not the kind of diving most people are familiar with.

“Worst-case scenario is they have to dive them out,” Pat Moret, a rescue consultant, told CNN. “It won’t be anything like diving that most people recognize. It will be diving in what is effectively muddy water, possibly fast-flowing, with no sense of direction,” Moret said. “You can’t tell what’s up, down, sideways.” To prepare for any type of diving rescue, the boys will have to be assessed for hydration, adequate fuel supply, adequate food so that their glucose level is adequate, and will also have to have practice dives as well.
The trapped boys are between ages 11 and 16 and are members of the Wild Boars soccer team. They had been exploring the cave network with their soccer coach on June 23, when heavy seasonal rains flooded the cave’s entrance. The group was forced further and further into the labyrinth of tunnels in search of high ground.