This is the day everyone in Cleveland dreaded: LeBron James — after he and the Cavaliers failed to win the NBA Championship — will reportedly take his talents to California and join the Los Angeles Lakers!

“LeBron James, four time NBA MVP, three time NBA finals MVP, fourteen time NBA All Star, and two time Olympic gold medalist has agreed to a four-year, $154 million contract with the Los Angeles Lakers,” Klutch Sports Group [LeBron’s agent] announced on July 1, according to ESPN.  This one sentence stabbed a knife into the heart of the entire city of Cleveland. After the Cleveland Cavaliers were swept in the 2018 NBA Finals, LeBron, 33, leaving seemed like a foregone conclusion, especially after he opted out of his contact. With LeBron leaving $35 million on the table, many had hope that like before, he would re-sign a new deal with Cleveland. That was not the case. His agent broke the news late on Sunday evening, and King James made it official on Instagram. LeBron thanked his home in his Instagram story, posting a picture of him from the Cavs’ 2016 NBA title victory parade. “Thank you Northeast Ohio for an incredible 4 seasons. This will always be home.”

To recap: After leading the Cavs to Cleveland’s first major sports championship in more than 50 years, LeBron signed a three-year deal in 2016 for $100 million. In the 2016-17 season, he earned a starting salary of $30.9 million, making him the highest-paid NBA player for the first time in his career. In the 2017-18 season, he made more than $33 million, but both seasons ended the same way: with failure to win a NBA Championship. The 2018 NBA Finals were particularly embarrassing, since the Golden State Warriors did what only the 2007 San Antonio Spurs had been able to do: sweep LeBron in the finals. It seems like that was the final straw for King James. With retirement on the horizon and his desire to grow his production company, a NBA insider EXCLUSIVELY told HollywoodLife.com that joining the Lakers was a “no brainer.“

The man many consider to be the “Greatest Of All Time” began his NBA career with his native Cleveland Cavaliers in 2003. After seven seasons without a championship, LeBron made “The Decision,” holding a 1-hour television special to announce his intention to join the Miami Heat. Along with Chris Bosh and Dwyane Wade, LeBron took his skills to South Beach and won his first NBA title in 2012. He went back-to-back with the Heat and returned to Cleveland in 2014. 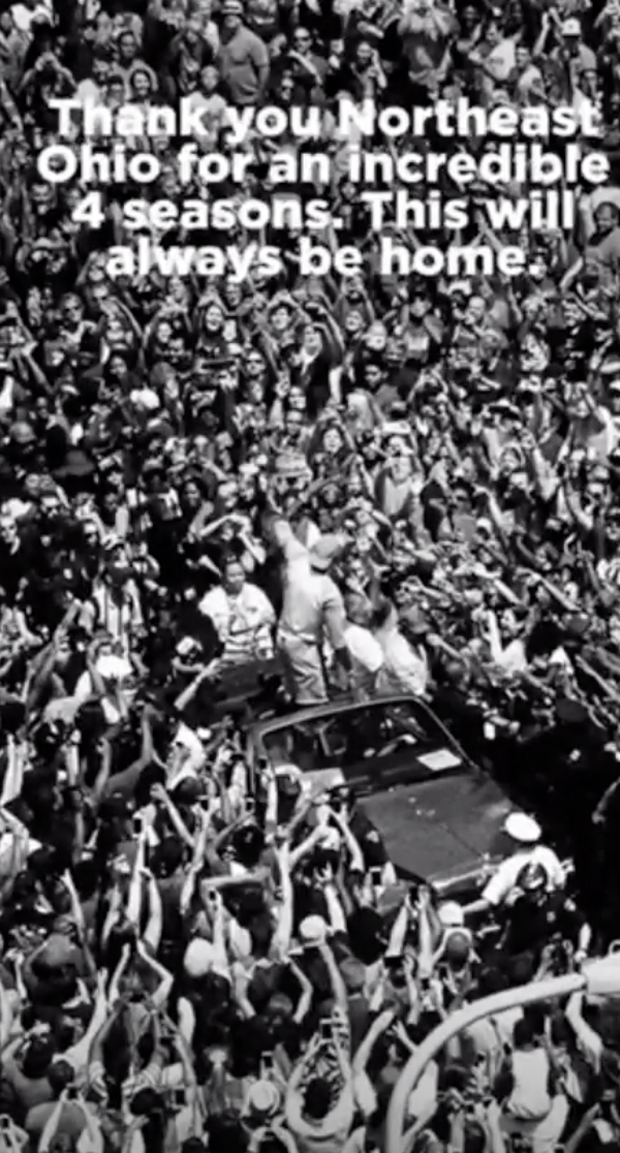 There was speculation about where he was and was not going to after leaving Cleveland. Back before he lost the NBA title, there was talk that he would join the Los Angeles Lakers so he could work close with Magic Johnson. There were also reports that LeBron wasn’t a fan of the city of Houston, so joining the Rockets was out. Some predicted that LeBron would opt out of his contract, just to re-sign with the Cavs. John Buccigross, a longtime ESPN anchor, said that the Cavs “will be able to offer LeBron James a projected max contract of five years, $205 million this summer; all other teams can offer four years, $152 million.” Obviously, there’s not enough money in the world to keep LeBron in Cleveland.