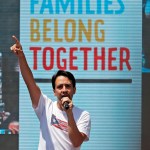 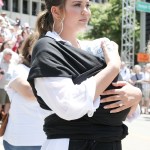 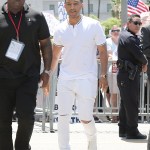 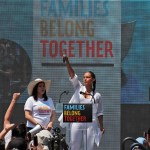 It was a spectacular day in the United States on June 30. Activists in all 50 states, Puerto Rico, and St. Thomas gathered to march and protest against the Trump administration’s unjust treatment of migrant families at the US .”border. The Families Belong Together rallies are a demand for change in a time of horror. Lin-Manuel Miranda showed up to the NYC rally and sang parts of “Dear Theodosia” from Hamilton as a lullaby for all the parents who can’t sing to their own children right now, and it was incredibly moving. Check out his emotional message below.

Families seeking asylum at the US-Mexico border are being treated like criminals and thrown in detention centers. Even worse, their children (over 2000 so far) are being ripped from their arms and taken to their own centers throughout the United States. Ahead of marching in LA’s rally, Selena Gomez tweeted, “Families seeking safety in our country need protection, understanding and opportunity, not detention. This is a moral choice, not a political one. #keepfamiliestogether #june30”. Meanwhile, Chrissy Teigen wrote, “There are 600+ #FamiliesBelongTogether events happening TOMORROW. I’ll be speaking and introducing @johnlegend in downtown LA. Text BELONG to 97779 to join. Find an event near you this weekend: http://familiesbelongtogether.org #FreeFamilies.”

People at the marches across the country have been blown away by the turnout. Ben Wikler, the Washington director of Move On, wrote, “Heat index is 105° and there are 30,000 people outside the White House right now standing in front the blazing sun to insist #FamiliesBelongTogether”. One marcher in Buffalo, NY even commented how protesters were surrounding ICE’s building, writing, “More Crowd on all 4 corners at ICE office. #FamiliesBelongTogether Buffalo NY”.

The crowd joins @Lin_Manuel in singing a lullaby for the parents who can’t sing to their children right now at the #FamiliesBelongTogether rally. pic.twitter.com/jN9y4Kewhy

Senator Bernie Sanders also tweeted, “Thank you to the thousands of people turning out today to protest Trump’s cruel policy of separating families. The United States of America must never be about tearing apart families or locking up children in cages. #FamiliesBelongTogether”.

Many of these migrants, some who don’t speak English, have no idea where their kids are, and the kids don’t either. The detained include babies and toddlers, who are being forced to go to court hearings. As ridiculous as it sounds, this is America right now. At the FBT rally in Los Angeles, celebrities are expected to come out in droves to lend their support. John Legend, an outspoken activist and Trump critic, will perform at the rally at City Hall in downtown LA. Other celebrities who expected to roll up: Orange is the New Black star Laverne Cox, Taboo of the Black Eyed Peas, Tara Strong from True Blood, and the casts of Jane the Virgin, One Day at a Time, and Vida. Amazing! We’ll keep you posted as more celebs arrive throughout the day.