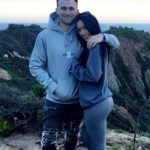 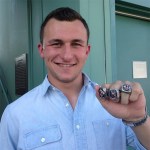 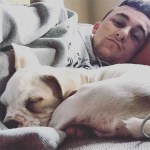 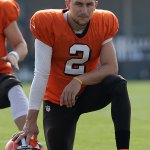 If there’s someone who could do with good news, it’s Johnny Manziel. So, is he about to become a daddy? Here’s why people think he might be.

If a picture is worth a thousand words, a new snap of Johnny Manziel, 25, and his wife Bre Tiesi speak volumes. At first glance it doesn’t look like much. In a photo obtained by the Daily Mail, the football star is crouched down wearing a hoody and tracksuit pants, with a sports bag slung over his shoulder, while his wife stands over him. SEE THE PHOTO HERE. They were in Toronto, Canada where Johnny was picking up his model wife from the airport. But in the picture, we spy with our little eye, something beginning with P.

Clearly visible in a panel of his Adidas bag is a pregnancy test. So, does that mean that Johnny is going to become a daddy? Or, at the very least, does it mean that they think they’re going to be parents soon? After the photo was published fans started to speculate on social media. One person wrote on Facebook, “Let’s hope not. He is still a child himself.” Another person wrote echoed those thoughts, writing, “He is definitely not ready to be a dad.” Yet another added, “Poor kid?”

It’s clear there are some very cynical people out there. The fact that Johnny has had a controversial few years that involved hard partying, fights, rehab and ultimately being cut from the Cleveland Browns in 2016 probably have something to do with it. But in February 2018 Johnny claimed that he has turned his life around, during an interview with Good Morning America in which he talked about having bipolar disorder.  “I was self-medicating with alcohol,” he said about his past behavior. “That’s what I thought would make me happy and get out of that depression.” But since then, he married Bre in March, signed up with the Canadian Football League in May and is now playing with the Hamilton Tiger-Cats. Could a baby be on the horizon too? Guess we’ll have to wait and see!