Melania Trump sent the wrong message by wearing a jacket that read ‘I really don’t care’ to visit migrant children on June 21. However, we’ve just learned the real reason behind her statement. Get the EXCLUSIVE details here!

It’s safe to assume that the past 24 hours in the White House have been a bit chaotic following Melania Trump’s appearance in an insensitive ‘I really don’t care,’ jacket, to go to visit detained migrant children in Texas. And, aside from her spokeswoman Stephanie Grisham’s claim that the jacket had “no hidden message,” FLOTUS has remained silent on the issue. Well, until now. “Melania is tired of being quiet and hiding inside the White House. She wanted to make it loud and clear that she really does not care for any of it. For weeks leading up to the ‘I don’t care’ jacket moment, Melania has felt frustrated, angry, and tired of being complicit to her husband’s actions,” a source close to Melania tells HollywoodLife EXCLUSIVELY.

This of course contradicts President Donald Trump’s explanation. “‘I REALLY DON’T CARE, DO U?’ written on the back of Melania’s jacket, refers to the Fake News Media. Melania has learned how dishonest they are, and she truly no longer cares!” POTUS tweeted on June 21, following Melania’s trip to Texas. “She wore the jacket against the advice of all of her aids and staff. It was her small act of rebellion against her husband, his alleged cheating, his policies that go directly against her, ‘Be Best’ initiative, and his other most embarrassing actions,” our insider continued.

“She is sincerely heartbroken about immigrant children being removed from families and sincerely does want to help and make a difference. She is also surprised that her attempt at sending a message to the world blew up in her face,” the source added. As we previously told you, almost every celebrity from Stephen Colbert to Julia Louis-Dreyfus weighed in on the jacket. “It’s endless with these morons,” Julia tweeted. 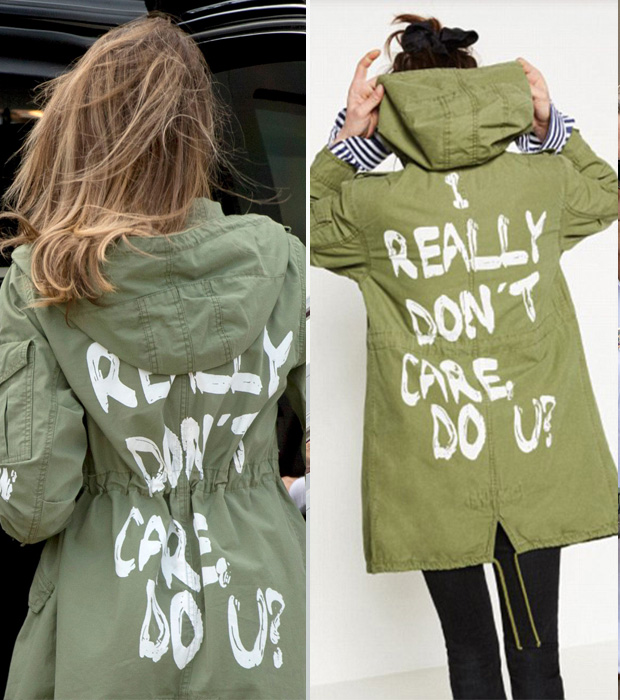 “She wasn’t expecting this reaction. She does care about the kids and was trying to do something positive to help make change and feels horrible that she is being misunderstood,” the source continued. While we’re glad to hear the real reason behind the statement, it still came across as heartless.