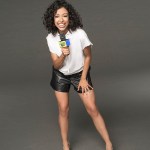 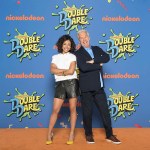 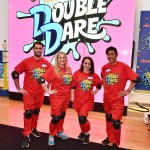 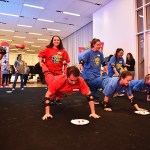 ‘Double Dare’ is back! The Nickelodeon reboot is set to premiere June 25. HollywoodLife talked EXCLUSIVELY with YouTube star and new host Liza Koshy about reviving one of her fave childhood shows!

Nickelodeon is reviving one of the most iconic game shows of all-time — Double Dare — with Liza Koshy, 22, at the helm. The YouTube star is the new host of the show, with original series host Marc Summers returning to give color commentary on the challenges.

HollywoodLife talked EXCLUSIVELY with Liza at the show’s press junket about the highly-anticipated reboot. She noted that her favorite OG challenge was “probably the hamster wheel,” which she learned was “literally physically challenging.” We also discussed how “honored” she feels to be a part of this experience, changes in the show’s format, and more. Check out our Q&A below!

What was your reaction when you got the Double Dare hosting gig?
Liza Koshy: “What?!” That’s exactly what I said word-for-word. Literally just “what.” One, it’s back? Two, me? It was exciting to be a part of my childhood all over again. I’m reliving the experience, but this time in real life. Instead of being in the physical challenge, I’m the one challenging them physically. It’s really cool to be a part of and be able to bring back. I’m honored. I’ve big shoes to fill — literally.

How does it feel to be bringing two generations together with the reboot?
Liza Koshy: That’s something that I’ve always strived to do with social media and in the traditional world as well. To be able to be a part of this as hosting on a network such as Nickelodeon that has been a part of my childhood for so long, and then creating kids content on my own for so long, it’s really fun to bring those two things together. In terms of, like, generation, closing that gap between each other and bringing it around for all good, family fun… it’s just a good time. Everybody of every age is able to enjoy it and sit back and watch and have fun.

Will there be changes to the original format?
Liza Koshy: It’s going to be shot differently, right? Because the technology has advance since 1988, when the first one came out. There’s going to be a lot that’s changed, but we’re also bringing back the classics — we have the ringer, the hamster wheel, the nose. We’re bringing back all that nostalgic, iconic stuff from back then, but we’re also mixing it in with technology and stuff we have now. We’re just going to make a bigger, better, bolder set and just have the slimiest, messiest challenges.

Why do you think people are still obsessed with Double Dare after all these years?
Liza Koshy: It was the first obstacle course where it involved kids. It had a mixture of things, with physical and mental challenges. It was just a big mix of stuff, and no one had ever done it before. I feel like it set the precedent for all these other shows. It set the format for all these other shows that wanted to do a mixture of trivia and obstacle courses. It was a confidence boosting thing for kids and for families, too. It brought people together. That’s something my family always watched together at night.

If you had to pick celeb guests, to go through the Double Dare obstacle course, who would it be?
Liza Koshy: I think it would be amazing to have Barack Obama and Michelle Obama on because they’re so involved with kids and getting them physically active and getting them moving, but also encouraging education and making sure girls are educated. I think that’s an amazing movement that she really pushed for when they were in office. I think it would be amazing to have them be on.

HollywoodLife also took part in the obstacle course at the show’s press day, and the experience was an absolute blast. However, it’s a lot tougher than it looks! Double Dare premieres June 25 at 8 p.m. on Nickelodeon.