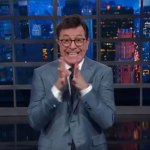 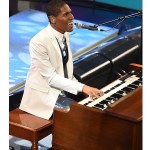 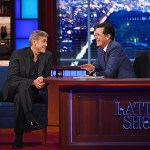 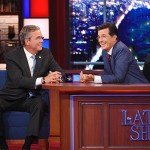 While Stephen Colbert did give Donald Trump credit for pardoning Alice Marie Johnson, he obviously didn’t miss the opportunity to poke some fun at the pres! Watch!

“I want you to brace yourself because here’s something I don’t normally say — Donald Trump did something good!” Stephen Colbert joked in his opening monologue on last night’s The Late Show. “Today he pardoned Alice Marie Johnson — a great grandmother and first time offender who received a life sentence for cocaine possession… He did the right thing, she didn’t deserve to be in there, but maybe he did the right thing for the wrong reason.” Colbert pointed out that Donald Trump did not go through any formal proceeding to pardon the woman, he did it because he had a meeting with Kim Kardashian West, who plead on Alice’s behalf. “So executive clemency is just a reality TV show – stay tuned for “The Pardoner!” “OJ will you accept this rose?”‘

The real kicker was when Colbert revealed CNN’s reporting claims that Trump administration has prepared paperwork to pardon over 30 people. “Ok, let’s see here… Iron Mike Tyson, Charlie Sheen, The Hot Mug Shot Convict, The Noid, Hannibal Lector, Fred Flintstone and Osama Bin Laden. Take that, Obama — you murdered an innocent man,” Colbert listed off names to pardon in his Trump persona. The late night show host has a point. Trump pardoned conservative author and filmmaker Dinesh D’Souza last week, and has most recently revealed he is considering pardoning Martha Stewart and commuting the sentence of former Illinois Gov. Rod Blagojevich. His interest in helping Blagojevich, Colbert pointed out, comes after his wife Patti asked for a pardon on Fox News. “Going on Fox News is a sure way to make sure Trump gets your message!” Colbert joked.

In all seriousness, Kim Kardashian’s dedication to helping Alice Marie Johnson was essential in getting the 63-year-old out of prison and back with her family. Kim’s close-knit family took to social media to congratulate her. “Kimberly you are such a beautiful person inside and out!! I am constantly amazed by your determination!” Khloe Kardashian wrote in a tweet. “Kim, I’ve never been so proud of you. You have the biggest heart in the world and mixed with your determination you are unstoppable!” Momager Kris Jenner posted on Instagram, sharing the tweet Kim wrote to share the news.