Who says your underwear has to be hidden from view? Not LeAnn Rimes. The 35-year-old stunned in Los Angeles on May 31, when she turned up at West Hollywood bar, The Abbey for a special pop-up show. The country star opted for a racy look by flashing her lacy bra and panties combo underneath a matching powder blue see-through dress. Obviously you need to have a lot of confidence to step out in that outfit and LeAnn was all smiles as she made her entrance. She posed for photos at the venue, showing off her fluffy high-heeled shoes, which completed her modern baby doll meets sex kitten look.

But LeAnn didn’t just put on the daring outfit to pop out to the bar and have a drink with friends. No, she actually performed in it. The singer took to the stage to sing some of her classic songs, according to Us Weekly, which obtained a video of her performance. LeAnn recreated that scene from the film Coyote Ugly by belting out a new version of her old hit, “Can’t Fight the Moonlight.” She also sang her 1997 ballad “How Do I Live” to a dance beat. It’s all part of her promotion of her new EP Re-Imagined.

LeAnn seemed to enjoy herself. She shared photos from the evening on her Instagram page, writing, “About last night… @theabbeyweho SUCH a fun night!” 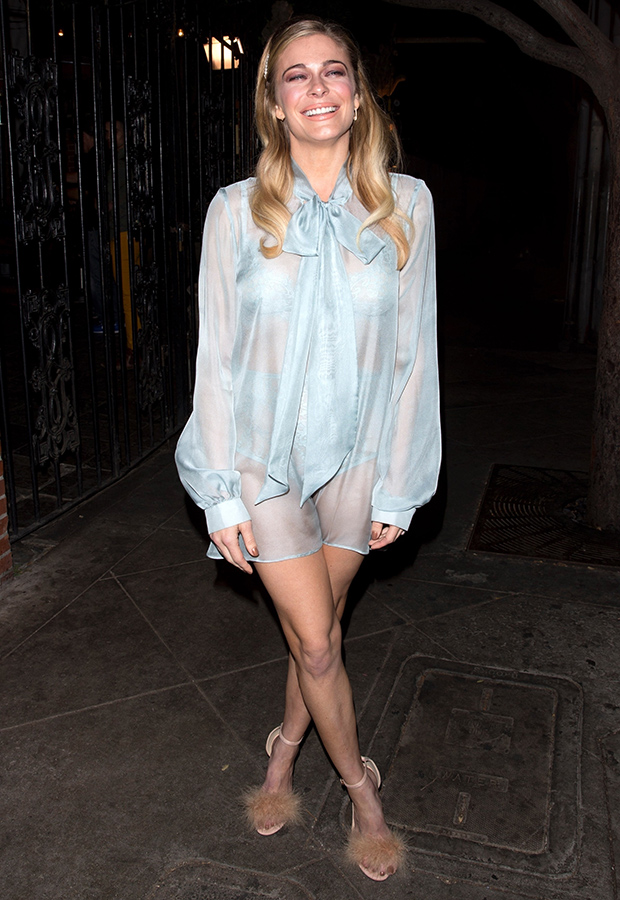 And, for those of you wondering how she kept her private parts private while wearing a see-through dress and equally revealing lacy panties, LeAnn shared her secret with her Instagram followers in a story. Holding up a packet of No Strings Attached, which is a patch to preserve her – how should we say it – modesty, she said, “And then we have this, which I’m not quite sure will stay…” Hopefully, it did!