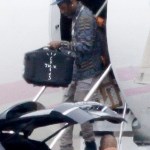 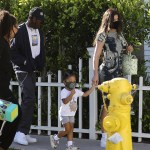 When baby’s away, mom and dad will play! Kylie Jenner and Travis Scott had a night out at the Houston Rockets/Golden State Warriors game, and they couldn’t keep their hands off each other. See the sweet PDA!

Stormi Webster‘s parents are so in love! Kylie Jenner and Travis Scott were fortunate enough to score courtside seats to watch the Houston Rockets play the Golden State Warriors on May 28, and they took advantage of the opportunity to get a little frisky. The makeup mogul and her rapper boyfriend traveled to Houston for game 7 of the NBA finals and were caught on camera by a fan in the stands laughing and kissing sweetly. Kylie has her arm around Travis, and it’s so cute. While you can’t see Travis’ face, Kylie looks ecstatic while they’re deep in conversation. Watch the video of their PDA below!

No wonder Travis adores Kylie. The mother of his newborn daughter is already back to her pre-baby form somehow, just three months after her birth. Girl looks good. That’s never more apparent than in the sleek, black catsuit she rocked at the Memorial Day game. The full-body suit hugged all of her curves and left nothing hidden. Her stomach is somehow totally flat again! Paired with knee-high black, stiletto boots, she’s totally in the running to be the next Catwoman. Right?

It’s, of course, not the only sexy outfit she’s rocked lately. Along with flaunting her huge post-pregnancy cleavage and her taut abs in crop tops, she recently wore this insane bodycon dress. The skintight, beige Fashion Nova dress is off-the-shoulder dress is ribbed like your favorite tank top, and guess what? It only costs $27.99. If you dare to dress like Kylie, you could totally afford this number. So cool! And we bet Travis loves it, too.