Juliet Roberts has been hard at work for years, honing her craft as a self-described “hippie nostalgic” singer-songwriter. After turning her love of music into a full-time job just a few years ago, Roberts’ voice can now be heard on the NBA’s biggest stage — the Finals! The Los Angeles-based musician has officially been named as the artist who millions of fans will hear during the NBA Finals promos throughout the post season.

The nod is a huge one for Roberts, seeing as she’s one of the first independent artists to accomplish such a feat. The promo spot (as seen above) debuted today on May 18; the two-week mark before the Finals, which begin on May 31. Her hit, “Finally Mine” is featured in the emotional promo, which shows both current and former NBA players’ heartfelt responses when the coveted Larry O’Brien Championship Trophy is finally theirs. The promo spot takes NBA-lovers back in time to relive some of the league’s most historic moments.

If you don’t know who Roberts is, we suggest you study up on the mega-talented singer, because she’s about to become music’s next buzzed-about artist! Read our EXCLUSIVE interview with Roberts, who just released her debut full-length album, Things Keep on Changing on May 18!

Can you explain the meaning behind ‘Finally Mine’ and why it’s so fitting for the 2018 NBA Finals?

This is the first time that i had done a full length album and this song came out and I was so excited I was able to work with the people I did, and the sport. The background of the song is wishing, hoping, dreaming — I’ve been wanting this and how special that this moment is finally happening. This was a big win for me. This album and the music that was just trying to take off for me, that’s what the song really spoke to… This song is about working hard for something and it finally happening, so it was a perfect placement. Finally mine has a meaning of pushing through and having something that’s finally yours.

What was going through your head when you saw your voice representing the NBA on its biggest stage, the Finals?

Related: LeBron James: See His Transformation From Rookie Sensation To One Of The All-Time Greats

It’s still sinking in because it doesn’t feel real still. It’s really magical, and it means so much to have my voice be behind the NBA. It really is very surreal and crazy. And, this video is a different angle. The NBA went on the emotional side, the feelings side, which this song is perfect for it. It’ll be part of history. This is going to be something that people will remember forever. You write a song and you write it for a certain thing, and it’s really special how music can take its own journey. I always say, ‘My songs are way cooler than me.’ My songs have also been used with Ronda Rousey a lot and other strong people. It’s just so cool.

I’ve joined a coveted list of other artists who’ve helped represent the NBA. And, it’s cool that someone who’s worked so hard and somebody like me who has so much heart, who’s given so much to their career and music, and it just shows you that that does mean something. I think NBA made a right move going with heart. They could’ve went with a big name artist, but they didn’t. 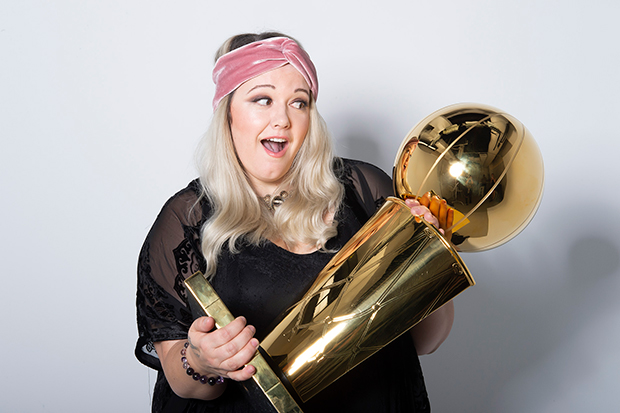 After millions hear your voice in this promo, what do you think will be next for you and your career?

Right now, I’m really excited about this opportunity with the NBA and to put my name somewhere on the map that i can build off of. My main goal with my music is just to have ears. All of my songs have a meaning. I have ‘Rise Above’ and so many other songs that have powerful meanings.

How would you describe your sound?

I have kind of a nostalgic vintage sound, from my core, my soul. But, i also have a lot of rock and a large voice, so kind of a mix of throwback, rock influence that makes you want to go out and feel and conquer sh-t.

When did you realize you were able to inspire and elevate people through your music?

I think it’s the little moments. I’ve always wanted to make change, but about three years ago, we’ve had some good opportunities to play for people that now may have passed and had some memories that are really special. That really changed me. Having moments where you make an effect on someone’s life and knowing that their time here on earth is limited and you were able to give them a moment of happiness is really special. That was a big turning point for me.

How do you want people to feel when they listen to your music?

Empowered, man! Everybody, I don’t care if you’re working here, or whatever, we’re all trying to make it. The music is about living your dream .When you feel like crap you just really need to reflect on your heart and keep going. My message is really about — Make your life better for yourself and just keep going and be empowered. My songs are tough, some of them are sweet, but they all have that kind of guiding message.