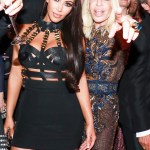 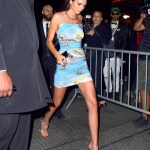 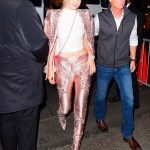 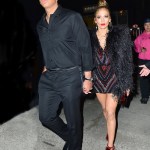 Kim Kardashian is clapping back at Beyonce fans who accused her of ripping off the singer’s Versace bondage dress. KK claims the look was an homage to super model Helena Christensen.

Kim Kardashian was all about Versace when she attended the Met Costume Gala on May 7. Not only did she wear a stunning gold gown from the design house to the event, she donned a strappy black bondage dress to attend the after parties. Members of the Beyhive were quick to go on the attack, pointing out that Beyonce, 36, wore a nearly identical frock for Complex cover in 2011. In a post on her website kimkardashianwest.com on May 15, the 37-year-old says she reached back to the 90’s for her incredible look. “For the Versace after-party, I kept my glam the same and changed into a bondage-inspired Versace dress,” she wrote. “I found the exact dress Helena Christensen wore in 1992, so I loved being able to re-create her entire look. She’s such a fashion icon!’ Click here to see Helena and Kim’s identical dresses.

Helena, 49, was one of the OG supermodels back in the day and rocked the gown designed by the late Gianni Versace at his fall/winter ready to wear fashion show in 1992. It featured a longer skirt than the one Kim wore to the after party, as she chose to shorten it above the knee. Still, the dress featuring numerous leather straps and buckles to form a bodice is one of the late designer’s most iconic pieces, so no wonder both Kim and Beyonce wanted to rock it. Super model Naomi Campbell, 47, also killed it in 2013 wearing the dress, showing that her trim figure could still fit into the exact vintage frock.

#BishStoleMyLook 💅🏽: Oooohhhhh #Roommates! We have the ultimate show down between #Beyonce and #KimKardashian! Both ladies wore this Versace bondage-inspired dress with a caged corset and bungee straps! Bey wore hers back in 2011 for a #Complex photo shoot, while Kim wore the same dress at a #MetGala after party last night. Obviously BOTH women killed this look! But we had to ask, who wore it better?! 👀👀 (📸: Backgrid/ @complex)

The Beyhive went on the attack when pics of Kim in the dress appeared, and they accused the reality star of being a late to the game copycat. “Lets be fair Beyonce would kill it today. She wore like years ago. Kim late as hell,” one fan tweeted while another wrote, “ALL HAIL QUEEN BEY YALL KNOW WHO WON. That means Kardashian shopping on the Versace clearance rack.” Kim did have some defenders, as one user commented, “I love me some Beyonce but Kim got this one,” and another wrote “Kim killed it.” Well, at least we now know who KKW was really copying, and it wasn’t the superstar singer.