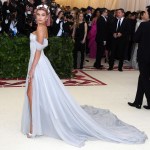 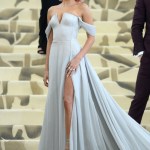 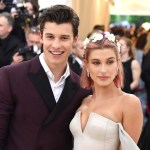 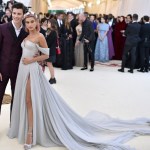 Mission accomplished. Hailey Baldwin and Sean Mendes made their debut as a couple at the Met Gala, stunning everyone on the red carpet. Shockingly, Hailey predicted this would happen years ago!

“Hey Shawn Mendes, let’s date so you can sing to me all day,” Hailey Baldwin, 21, reported tweeted on October 9, 2013, according to a now-deleted tweet dug up by Pop Crave (via Teen Vogue.) “I’m joking but not really.” Even though Hailey didn’t @ the now 19-year-old singer, Shawn seemed to hear about it, as he tweeted a month later: “Just finding out now that [Hailey] tweeted at me!”

Though Pop Crave rediscovered Hailey’s premonition in Dec. 2017, the tweet got some extra attention after she and the 19-year-old singer confirmed their long-rumored relationship by accompanying each other to the Met Gala on May 7. Shawn, dressed in a double-breasted mauve suit, looked like a classic leading man, while Hailey wowed everyone by debuting her pink hair while wearing an elegant ethereal gown. So, the question is – what is Hailey’s secret? Was it The Secret? Voodoo? Twitter black magic? Whatever she did to materialize this romance, it clearly worked. Fans seemed to follow in her footstep, @’ing at their celebrity crushes in hope that they would reap the benefits.

Hailey “is totally into him and Shawn is the first guy that has been able to get Hailey to completely forget about Justin Bieber,” a source close to Hailey EXCLUSIVELY told HollywoodLife.com. Judging by how he was such a sweetheart at the Met Gala, no wonder. Shawn spent the night “constantly complimenting her,” telling her how much he thought she looked beautiful. He even helped her out, adjusting her dress’s train so that she would continue to look flawless.

Hailey Baldwin went from fangirling over Shawn Mendes in 2013 to dating him in 2017. 😲 pic.twitter.com/uiWvdwzbOr

Just finding out now that @haileybaldwin tweeted at me !

Shawn and Hailey’s romance seemed to start up around the most romantic holiday of all – Halloween! Hailey threw a party with Kendall Jenner and Justine Skye in 2017. Forget candy — Shawn ended up as Hailey’s treat. By the end of the night, eyewitnesses said they were “inseparable,” and they were PDA’ing like crazy. Over the next few months, they would keep their rumored romance on the DL, until confirming it at the Met Gala.