All eyes were on Hailey Baldwin, 21, and Shawn Mendes, 19, last night at the Met Gala, when they went public with their rumored relationship for the first time! Following the star-studded event, the pair changed their looks and went out again to celebrate the evening in NYC! Hailey changed out of her angelic Tommy Hilfiger gown and into a sexy, lacy nude gown with a sheer skirt and high slit. Her bubblegum pink locks were put up in a beehive on the top of her head and she rocked a pair of hoops that are so on-trend right now! Shawn, on the other hand, kept things simple by just removing his deep purple jacket, and unbuttoning a few buttons on his shirt. See all the Met Gala after-party pics here!

Hailey and Shawn shocked everyone when they arrived at the Met Gala hand-in-hand, confirming their relationship. Both representing Tommy Hilfiger, the pair were all-smiles on the carpet together. At one point, Shawn even hung back to fix Hailey’s long gown for a photo. So cute! During the night, the couple posed for a pic with Ariana Grande and Troye Sivan, for the ultimate squad goals pic. Rumors that Hailey and Shawn were getting close started in October 2017 when they were seen getting cozy at a Halloween party. They’ve been spotted together a few times since, hanging in Shawn’s hometown of Toronto over the holidays, and attending Coachella, but they never confirmed a romance. Last night, that all changed when they only had eyes for each other on the Met Gala red carpet! 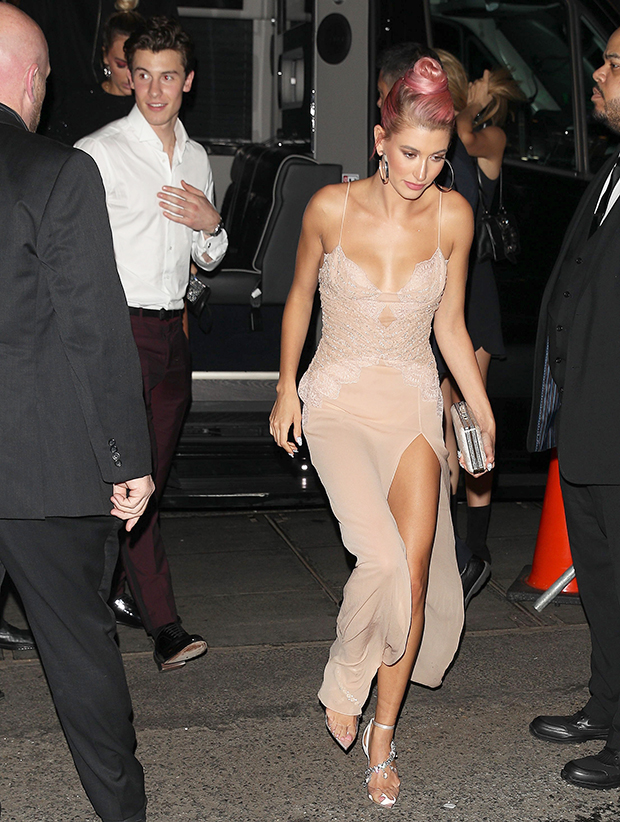 Hailey and Shawn weren’t the only ones who made their couple debut at the Met last night! Lili Reinhart and Cole Sprouse arrived together and made their red carpet debut as a couple, and had everyone swooning! Ah, young love!