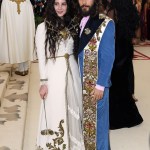 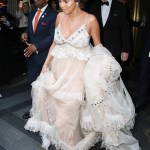 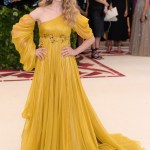 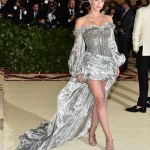 Anything goes when it come to Met Gala fashion, and as always, this year’s red carpet featured some pretty wacky ensembles. Check out the wildest looks from the stars here!

The 2018 Met Gala is finally here! The theme for this year’s event is Heavenly Bodies: Fashion and the Catholic Imagination, which provided us with some very out-there looks on the red carpet. The Met Ball is fashion’s biggest night of the year, and stars are known to take their style game to the next level at the event, even if it means wearing something they wouldn’t normally be seen in. This year, that was no different, as tons of big-name celebs showed up in crazy dresses to fit the theme. Click through the gallery above to check out the most outrageous looks of the night!

One of the first arrivals to show up in quite a wacky look was Liza Koshy — although her ensemble was a bit conservative from the front, the back was completely see-through, putting her entire butt on display, as she was wearing a thong underneath! The guys from Migos also stood out on the red carpet with their outrageous ensembles. The guys rocked different variations of patterned blazers, which all clashed with one another. Oh, and they also all decided to wear their sunglasses as the photos were taken!

Amanda Seyfried is usually a red carpet queen, but she sort of missed the mark at this year’s Met Gala, we have to admit. The actress looked a bit washed out in her yellow dress, which featured one long sleeve and one poofy shoulder. Although the gown fit the theme, it was certainly quite a wild look compared to what we’re used to seeing her in.

The rest of the most outrageous Met Gala red carpet looks are in the gallery above! Get to it!