Do you wake up every morning since Donald Trump was elected, and like Stephen Colbert, feel sick about how the America you love is under assault… and our by own president? Then take heart from Senator Kirsten Gillibrand, who represents New York State in Congress, and came into the HollywoodLife.com office for an exclusive podcast interview. Gillibrand is committed to fighting for what’s “right”, and against Donald Trump’s divisive and “un-American” policies. “This president has used his power and position to divide this country further, to continue to talk about building walls and to continue to talk about moral equivalencies when you’re talking about racism and racists,” she tells us, referring to Trump calling the Nazis and Ku Klux Klan who conducted a violent rally in North Carolina “very fine people.” And this was after one of those white nationalist protesters killed an innocent young woman who was peacefully counter-protesting.

Gillibrand calls out Trump for cruelly continuing to “attack the most marginalized in society, and to undermine basic civil liberties for all sorts of people,” including trying to ban approximately 4,000 transgenders serving in the U.S. military. He’s “saying that your sacrifice is not worthy. That’s outrageous to tell that to a member of our armed services who’s willing to die for this country.” Pretty galling, considering that Trump received five deferments from serving in the military during the Vietnam War, including one for having bone spurs in his heels, which nonetheless, never prevented him from playing tennis and golf. Also, note that his nemesis, special prosecutor and former FBI director, Robert Mueller, won two awards for valor in Vietnam and was shot in the thigh, while leading his platoon which was under attack. let me add here; didn’t the Declaration of Independence hold self evident that “all men are created equal” and therefore transgenders should have the same rights as any other American to demonstrate their patriotism by serving in our military? Gillibrand sees the situation that way too, and also points to Donald Trumps’ promised Muslim ban as another example of the “wrong” that’s winning now.

“The fact that he doesn’t want Muslims to come to this country. The country was founded on the notion of religious freedom, and so to make that a statement and a policy from the White House, is also very concerning,” she tells HollywoodLife.com. “The fact that he’s taken on the freedom of the press. The fact that he takes on the independence of the judiciary or the independence of the Department of Justice. He’s just undermining norms […] and through a lot of division and hate.” Gillibrand is convinced that a majority of Americans, including most young women, are deeply distressed that the country they love which was built on democratic values like freedom of the press and democratic institutions, like an independent Department of Justice, are being attacked daily by the very person who is supposed to be the biggest protector of all those cherished pillars of democracy.

She has seen a ten-percent increase in young people turning out to vote in special local elections in the past few months, and she believes that young people will help flip the House of Representatives and possibly the Senate in the upcoming midterm elections. Millennials now account for over 83 million Americans and a bigger voting block than the baby boomers.  “If we can do those things, you can stop the worst things that this president wants to accomplish,” she tells HollywoodLife.com. Gillibrand believes that Trump’s name-calling and attempts to destroy the American tradition of caring about others, can be defeated. “My view is what makes this country great is that we’ve always cared about one another; that we actually believe in the Golden Rule; that we want to treat others the way we want to be treated… It’s why we have public schools, public hospitals, why we’ve built roads and bridges and world broadband because we believe everybody should be treated the same.” 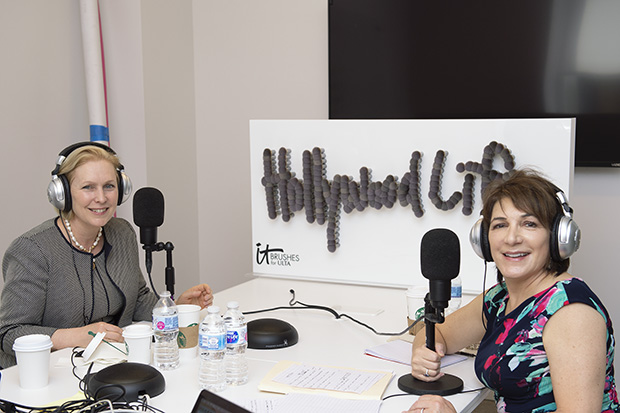 So if you believe that America is based on caring for – not hating – others, and that free speech, a free press and equal rights for every American are essential to our country – then you must get out and vote in the November midterm elections. Senator Gillibrand is running for re-election and says that almost 400 women are running for Congress this fall. If you want to stop Donald Trump’s policies and vote to protect our environment, protect women’s rights, public education, access to affordable healthcare, get paid family leave and a break on student loans, this election, you are going to have to vote democratic. So make sure you’re registered to vote. Every one of your votes matters! To listen to the rest of our podcast interview with Senator Kirsten Gillibrand, head to iTunes, or check out what she said about Kanye West here.