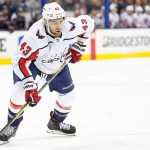 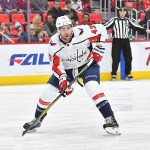 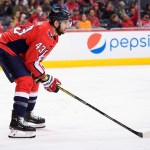 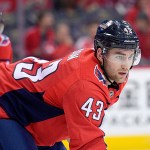 Ouch. After watching Tom Wilson drive his shoulder into Zach Aston-Reese’s jaw, no wonder the Washington Capitals player was suspended. As he serves his punishment, get all the details on Tom.

1. He’s been suspended three games for delivering a nasty hit. The Washington Capitals are currently up 2-1 on the Pittsburgh Penguins in the quarterfinals of the NHL Playoffs. However, Tom Wilson, 24, will be sitting on the bench for the next three games after what he did to Pittsburgh’s Zach Aston-Reese, 23. During the second period of Game 3 on May 1, Tom checked Tom near the benches. The impact left Zach with a broken jaw and a concussion.

While hockey is known for being the sport where dudes engage in fistfights while wearing blades on their feet, intentionally targeting an opponent’s head is a no-no. Some angles of the play suggested that Tom was aiming for Zach’s shoulders. However, after reviewing the hit, the NHL’s Department of Player Safety ruled on May 2 that Tom “(made) the head the main point of contact on a hit where such head contact was unavoidable,” per CBS Sports. They gave Tom a three-game suspension. Tom will be back for Game 7, if the Pens-Capitals series goes that far.

2. He’s a repeat offender. This isn’t the first time Tom has been disciplined by the league. While playing a preseason game against the St. Louis Blues in Sept. 2017, Tom delivered a late hit on Robert Thomas, 18, resulting in a two preseason game ban. Man, who gets suspended in the preseason? Tom Wilson, that’s who. He was also suspended for the four games of the 2017 season, without pay, for boarding St. Louis Blues forward Sammy Blais during another preseason game. He also has been dirty during the post season, per Sports Illustrated, delivering questionable hits on Alexander Wennberg and Brian Dumoulin.

Another hit to the head by Tom Wilson pic.twitter.com/PAiErjxNPF

3. Tom probably won’t change his style after this suspension. “Every time you make a body check, you’re making a split-second decision,” Tom said in Sept. 2017, following his suspension over the hit on Robert Thomas, per NBC Sports. “I take pride in the physical nature of my game. I take pride in my body checks. This is my fifth season, and I’ve made a lot of body checks — very clean, hard hits. So I trust myself. Maybe it was a second late or whatever, but I’m going to learn from it and I’m going to continue to play my game, my hard-natured hockey.”

4. He’s a gold-medal winner who’s been in the NHL since 2013. Tom was born in Toronto, Ontario, Canada. As a youth, he won the Gold Medal with Team Ontario at the 2011 World U-17 Hockey Challenge. The Capitals picked him as the 16th overall in the 2012 draft. He made his professional debut in May 2013, joining the Capitals in Game 5 of their 2013 Stanley Cup playoffs series against the New York Rangers.

He knows “whatchu want.” Since he’s not going to be busy for the next three games, maybe he can film another commercial for Paisano’s Pizza. Of all the endorsement deals that Tom has landed, this one is best – if just for the meme-worthy, earworm chant of “WHATCHUWANT.” Tom joined Terrelle Pryor, Ryan Kerrigan, Santana Moss, Brian Mitchell, Ken Harvey, and Craig Laughlin for a 2017 commercial that is both wonderful and cringe-worthy at the same time (credit to the Washington Post.)

Well, what Capitals fans want is to have their squad advance past the second round of the NHL Playoffs for once. Maybe Tom can give them that by laying off the “hard-natured hockey” for a little bit?