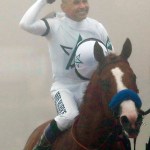 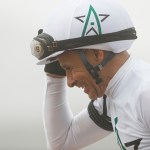 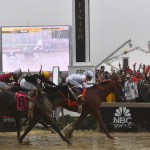 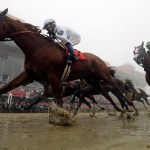 The Belmont Stakes just wrapped up and one horse won it all: Justify! Here’s everything you need to know about this Triple Crown winner!

UPDATE: JUNE 9, 7:00 P.M. EST — Justify has just won the Triple Crown at the Belmont Stakes, becoming the 13th horse to earn the prestigious honor. Also, he is only the second horse in history to achieve the Triple Crown with an undefeated record!

ORIGINAL STORY: He was the favorite to win the Preakness… and like the Kentucky Derby, Justify did it again! The 3-year-old chestnut colt beat out Good Magic in the final moments, claiming another win in the prestigious Triple Crown! It was a foggy, muddy day at Pimlico Race Course and yet Justify looked right at home as he pulled ahead of the pack to take home the prize! Here’s everything you need to know about this championship horse!

Talk about a winning duo! As with the Kentucky Derby victory, Justify’s jockey was Mike Smith, a legend in the industry with decades of experience working with world-class thoroughbreds. So this incredible horse was in good hands! “I’m having more fun riding right now than I’ve probably ever had,” he said to Blood Horse in 2014. “I’m just so blessed to be riding some great horses for some great people, and I’m really enjoying it.”

He broke the Curse of Apollo at the Kentucky Derby. The last time a “rookie” – aka a horse that didn’t race as a 2-year-old – won the Kentucky Derby was in 1882, when a horse named Apollo came in first. So, Justify broke a 136-year-old dry spell. That’s seriously impressive.

Also, prior to the Kentucky Derby and he was just a “rookie.” The Kentucky Derby is a Grade I stakes race for three-year-old Thoroughbreds, meaning that all the racers were born (foaled) in 2015. While most of the competitors were racing when they were two years old, Justify didn’t make his first start until Feb. 18, racings – and winning – a maiden special weight race. He’s had run two other races at that point, winning both the allowance optional claiming and the Santa Anita Derby.

Now that he’s claimed victory at the Preakness Stake, Justify is undefeated in 5 career starts. Amazingly, all of them came within the last 3 months!