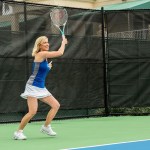 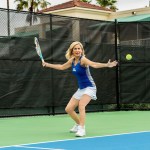 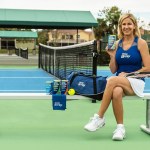 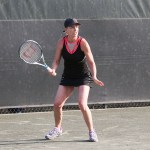 Tennis icon Chris Evert is known for being the best in the game, having won 7 World Championships over her 20-yr career. But, she wants her legacy to be much bigger than that, and she revealed just how she plans to do it!

Whether you’re a tennis fan or not, you know the name, Chris Evert, 63. A seven-time world champion, Evert is the former No. 1 tennis player in the world. When we caught up with her at the BNP Paribas Open in Indian Wells, California in early March, a humble Evert blushed when referred to as a “legend.” But, is there really any other word that comes to mind when her name is brought up? — Actually, yes. What about teacher, a business woman, an entrepreneur, an educator, an efficient sports analyst for ESPN, a good friend, sister and daughter… the list goes on.

While we could go on forever about her 34 grand slam singles finals (more than any other player male or female in history), or the fact that, to this day she holds the highest career winning percentage in singles matches (89.97 percent) among men or women, it’s almost as if her life started all over again after retiring from the game. Although she doesn’t dare take her opportunities, supporters or legacy for granted, Evert tells us she wants to be remembered for a lot more than just her tennis career.

Evert told us that despite retiring from the sport professionally, she still plays tennis quite often. In fact, when she’s not hitting the court with her sister, she’s participating in tennis at her very own Evert Tennis Academy in Ft. Lauderdale, Florida. Now, she’s educating young, aspiring tennis players on the sport and so much more, as her academy believes that schooling should never take a backseat to athletics. At the full-time training facility — which one year, sent nine students to Wimbledon — young athletes are trained by the finest handpicked developmental coaches to ever work within the sport. Those who enter Evert Tennis Academy are provided with the physical and mental tools required to succeed in the game of tennis, but also, life. The academy provides unparalleled athletic training, along with collegiate and career practices. With this facility, Evert is giving our youth endless opportunities to excel in life, and for that, we commend her.

Evert later explained how she herself plans to excel in terms of her own health. “I have no plans to slow down anytime soon,” she says. — That’s where Osteo-Bi-Flex comes in. The joint health brand has been a catalyst in Evert’s health journey as she’s focused on making sure she’s moving as much as possible. “The older I get, I don’t have the movement and flexibility I had when I was playing tennis professionally… It’s just life,” Evert explained, adding that Osteo Bi-Flex has helped with just that. Now, she’s moving with more comfort than ever, which she’s grateful for because, “I don’t want to stop playing the game I love.”

So, why Osteo Bi-Flex? — Evert, who won 18 Grand Slam singles titles during her career, trusts the joint-aid to keep her in grand slam shape because of its longevity. “It’s been around for 20 years.  It’s proven,” Evert said of the No. 1 pharmacist recommended brand. And, by proven, not only does she (obviously) use it, but, Evert went on to say that the product has been tested and supported by scientists, researchers and technicians for years.

Evert admits that with the help of Osteo Bi-Flex, she’s been able to keep moving while enjoyinh some of her favorite activities. — Hot yoga, tennis as her cardio and longtime love, (of course), and weight training. And, don’t count her out of anything fun. Evert says she maintains a balanced diet with “everything in moderation and a few glasses of wine (laughs).”

“Osteo Bi-Flex encourages joint comfort, flexibility and movement and Chrissie Evert has partnered with the brand because as a former athlete she knows first-hand how important it is to keep moving and stay active in order to continue doing what she loves.” — Learn more about Chris Evert’s partnership with Osteo Bi-Flex. 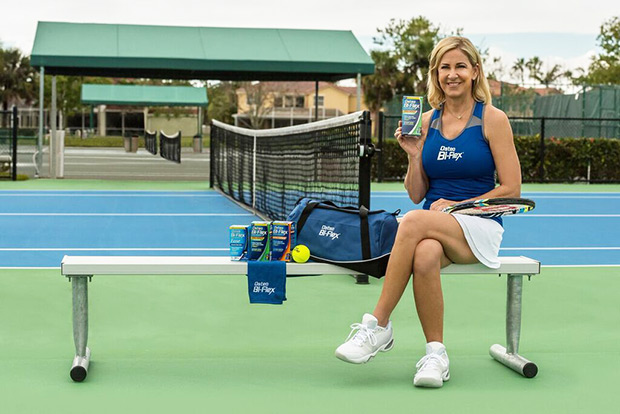