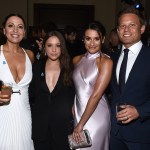 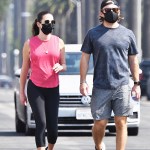 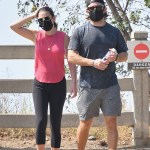 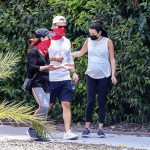 OMG! Naya Rivera, who is known for her nasty feud with former Glee co-star Lea Michele, actually liked Lea’s engagement ring Instagram pic on Apr. 28. Does this mean they buried the hatchet and are friends?!

Do we have a reconciliation happening?! Lea Michele, 31, posted an amazing photo of herself flashing her new 4 carat diamond ring on Instagram after getting engaged to bf Zandy Reich on Apr. 28 and none other than Lea’s nemesis, Naya Rivera, 31, liked it! The former Glee co-stars are known for not getting along over the years but this one small action on Naya’s part could have a very big meaning! Did the two bury the hatchet behind the scenes or is Naya attempting to put the past behind her by liking the pic? Or perhaps she was just feeling generous and figured she’d show her happiness for the love? We don’t know the answer quite yet but it’s definitely sparked up some interest and has us all wondering what’s going on!

Lea first posted her Naya-approved engagement pic on Apr. 28 and it put fans in a frenzy. “yes,” the new fiancee proudly captioned the photo along with a diamond ring emoji. Although she received the support from many of her celeb buddies and former co-stars, we never expected Naya to be one of them! The two talented actresses seemed to get along back when Glee first started but things seemed to dwindle over the years. Naya took her time to write about her feud with Lea in her 2016 memoir, Sorry Not Sorry: Dreams, Mistakes and Growing Up and it wasn’t pretty. “One of the Glee writers once said that Lea and I were like two sides of the same battery and that about sums us up,” she wrote in the memoir. “We are both strong willed and competitive—not just with each other but with everyone—and that’s not a good mixture. As the show progressed, though, that friendship started to break down, especially as Santana moved from a background character to one with bigger plot lines and more screen time. I think Rachel—erm, I mean Lea—didn’t like sharing the spotlight.”

Naya also pointed out that she thought Lea was very sensitive while on-set and seemed to blame her for anything she could. “If I’d complained about anyone or anything, she’d assumed I was bitching about her,” Naya continued in her memoir. “Soon, she started to ignore me, and eventually it got to the point where she didn’t say a word to me for all of Season 6. Lea and I definitely weren’t the best of friends.” Naya also admitted that although they definitely didn’t get along and she doesn’t expect them to hang out together as friends in the future, their feud was sometimes blown way out of proportion in the media.

Now that a couple of years have gone by and both Lea and Naya have had some ups and downs of their own, they may be gaining a different perspective which could contribute to the fiery feud burning out. Until we know for sure, we can dream! Seriously, though, how great would it be to see these two become friends again?

We’ll be on the lookout to see what happens with Naya and Lea from here!