Mommy shamers weren’t the only ones furious that Blac Chyna put pink extensions in her baby girl’s hair. Daddy Rob Kardashian was upset too and he let her know it.

Rob Kardashian, 31, is “furious” with Blac Chyna, 29 – so says a pal close to the Keeping Up With the Kardashians star who has spoken EXCLUSIVELY to HollywoodLife. When Chyna shared an Instagram photo of their daughter Dream, 1, wearing pink hair extensions on April 25, the mommy shamers came out in force. They flooded the ex-stripper’s account with nasty comments and the young mom later deleted the photo from her page entirely. Now it seems that Rob may have been the one who made her pull the pic. Our source tells us, “Rob went off on Blac Chyna over the picture she posted of Dream with the pink hair extensions. He was absolutely furious.”

While trolls accused Chyna of treating the toddler like a doll, Rob apparently had other reasons to be angry with his baby mama. The insider says, “He doesn’t trust Blac Chyna at all and questioned what her intensions were. It really upset him because he felt like she was using Dream to get attention for herself. They had a huge fight about it. Eventually Blac Chyna backed down and deleted the picture but that was only after Rob threatened to get his lawyer involved.” That may be the conversation – sorry, argument – they had privately but in public Chyna was very defiant when confronted about the controversy by TMZ on April 27. In a video clip she played down the extensions saying, “They’re called baby clips. Every little girl has them… “ And the controversy? Chyna said, “I don’t care, not at all.”

As for Rob, when he shares photos of their daughter on Instagram, there isn’t a pink hair extension in sight – just barrettes, ribbons, braids and curls. How ever her parents style her hair little Dream always looks adorable and seems completely oblivious to all the bickering. 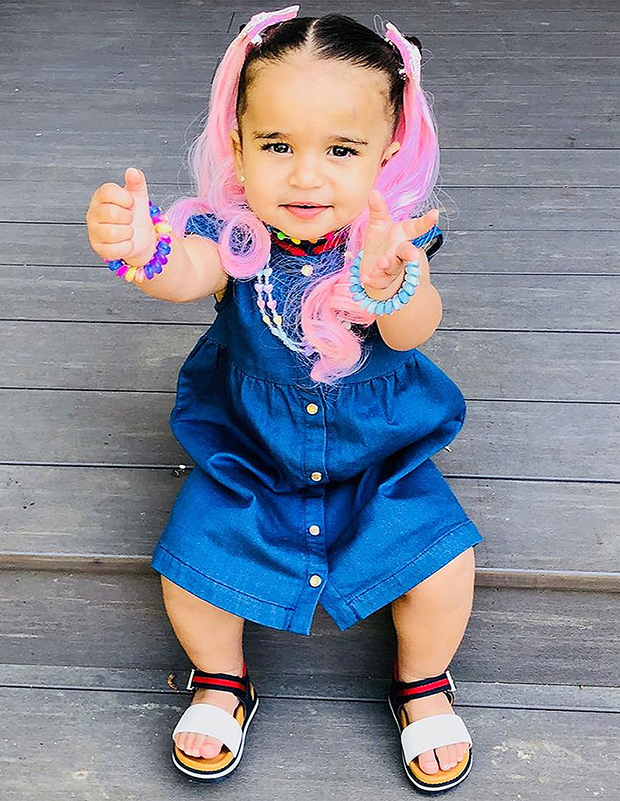 On April 23 the proud papa shared Instagram pictures of the toddler rocking two styles – curls in one and a ponytail in the other. He captioned the second photo, “My baby looks like two completely different girls in a matter of minutes.” We’re guessing Rob won’t be clipping any pink extensions on to his baby girl’s hair anytime soon…