What a post-divorce makeover! Kendra Wilkinson has ditched her signature blonde locks and not only dyed her hair brown, she cut it too! We’ve got her unrecognizable new look.

Kendra Wilkinson is looking nothing like her old self as she hits the market as a single woman for the first time in nearly nine years. The Kendra On Top star did what so many women do when they get out of a long term relationship, as she totally changed up her hair. The 32-year-old filed for divorce from husband Hank Baskett, 35, on Apr. 8 and now she’s looking like a new lady! The former Playboy Playmate hit the salon on Apr. 26 and when she left, her signature long sunny blonde locks were gone and she’s rocking a shorter brunette ‘do! Kendra showed off her shocking makeover for her fans on social media. She tweeted the day prior that she was “90 percent sure” that she was going to get brown locks and she mustered up the courage to ditch her blonde hair for the first time ever.

“Refresh button being pushed at the moment. Time for a change. Time to have a different outlook. Time to let go of the past and embrace new,” she tweeted about her decision to go brunette and her fans went absolutely berserk waiting to see the results. The paparazzi even chased her as she headed into the salon as a blonde for the last time, and once inside she shared an Instagram story video giving followers one last glimpse of her light hue. “All right, time to say goodbye to my blonde for the first time ever. It’s time to enter the dark side,” she said with sly empowerment in her voice. 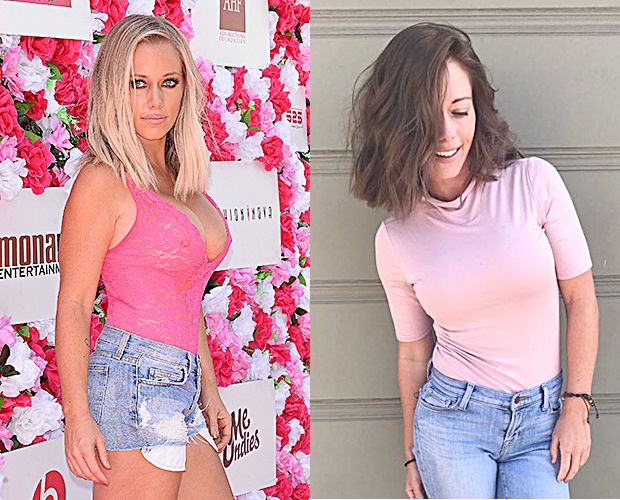 Kendra really went there, as she looks completely unrecognizable with her new chestnut locks. She’s still gorgeous, she just doesn’t look anything like the woman we’ve watched evolve on reality TV ever since E!s The Girls Next Door. In addition to going brunette, she also seems to have chopped off several inches of hair as her wavy style now rests on her shoulders. Fans couldn’t get enough, telling her on Twitter how beautiful she looks and how impressed they were with how the dye job turned out. She responded “I’m not here tryin to impress anyone but myself. F**k it all. I’m excited.”