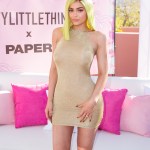 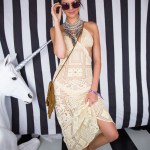 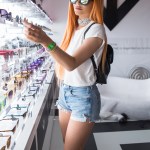 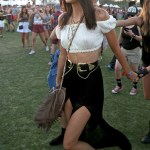 Kendall Jenner and DJ Diplo were reportedly touching each other and hugging quite a bit while spending time at a Coachella party together on Apr. 20. Are they headed for a hot new romance?

Kendall Jenner, 22, and DJ Diplo, 39, were getting very friendly at a Coachella bash in Palm Springs, Ca on the night of Apr. 20, according to a source. The party was put together to celebrate the launch of a cosmetics brand that is run by Kendall’s sisters, Kourtney Kardashian, , and Kylie Jenner, 20, and Kendall and Diplo were among the many attendees. “Kendall and Diplo were super-flirty at the party,” the source told The Sun. “There was lots of touching and some extended hugging. They both appeared to be comfortable and familiar in each other’s company and hanging off everything the other ­person said. Diplo was ­stroking her arm. They were in great spirits.” Woah! It definitely sounds like something may be happening between these two.

In addition to celebrating her sisters’ career successes while hanging out with Diplo, Kendall was celebrating her own success. “Kendall was toasting the launch of her show on Apple Music radio station Beats 1 while Diplo did a DJ set,” the source continued. “It was the talk of the bash. Everyone ­wondered whether there could be something more going on between them.”

The news of Kendall and Diplo’s flirty night comes just after Kendall made headlines when she ignored her rumored beau Blake Griffin last weekend when they attended the same Coachella party. Blake reportedly walked right past Kendall while at the party and they didn’t speak to each other all night. Despite the icy lack of exchanges, the two were later seen having dinner together in West Hollywood on Apr. 19. “Kendall has a lot of male interest and isn’t keen to be tied down in a serious relationship,” another source told the outlet. “Diplo is an extremely eligible catch and she seemed very ­flattered at the attention he was showing her.” Hmm… Will Kendall stay with Blake or take a chance on the hunky blond DJ? We guess we’ll just have to wait and see where things go from here!