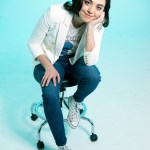 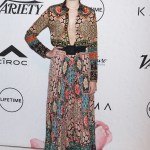 If you have a Damian in your life, consider yourself lucky. Barrett Wilbert Weed has a few, but every night, she shows the world what they’re missing if they don’t. The ‘Mean Girls’ actress shares her love for her co-star Grey Henson & explains how they perfectly mastered their on-stage dynamic.

Every night on the stage is different for Barrett Wilbert Weed, who plays Janis Sarkisian in Mean Girls on Broadway. Some nights, she’ll jump onto Grey Henson‘s lap, a rare, but welcomed, display of affection, diverging from the Janis Ian we all remember from the 2004 film. Other nights she’ll hold in a giggle while Grey, who plays Damian, changes up his line delivery in order to try and make her laugh. The duo portray the truest friendship in the show as they narrate the “cautionary tale” of Mean Girls in a series of flashbacks from Cady Heron’s first day at North Shore to her transformation into a shiny plastic betch. Grey and Barrett’s on-stage chemistry, number to number, is a beautiful connection of trust and love, and it’s evident throughout the show. “I do not think in the movie that Janis and Damian were like holding hands or hugging or sitting on each other’s laps, but that’s just kind of how we are in life, so that’s just what we do!” Barrett said in an exclusive interview with HollywoodLife. Before the two were on the August Wilson Theatre stage, they were working together to nab an audition for the roles they now have. “We were trying to get these parts like right out the gate. We’re texting each other, being like, ‘It has to be us. It has to be us. You have to get this.” Once Barrett got an appointment, Grey’s chance came shortly after, and the rest was North Shore High history.

“I love him so much. He could have all of my money and all of my major organs,” Barrett laughed, but it wasn’t hard to tell she really wasn’t kidding. “He is a wonderful person to be on stage with and he’s a wonderful friend. I think it’s so incredible because the role really is him. I mean, it really is him. He’s an incredible tap dancer, they put a tap number for him.”

Now, none of this is to say that Barrett needs Grey by her side at all times to carry her own in the show — she don’t need no man! In fact, her stand-out moment is all on her own and comes in the form of the Nell Benjamin-penned anthem “I’d Rather Be Me.” “It’s a very simple song but the message is I would rather be me than be with people who make me feel small or make me feel shitty or make me feel like I’m not worthy being loved,” Barrett explained. “I’d rather be happy than hang out with anybody.”

HollywoodLifers, you can hang out with Barrett, Grey and the rest of the Mean Girls cast on Broadway — RUN and get your tickets. But, like, try to avoid getting hit by a bus, or something.