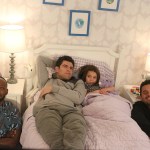 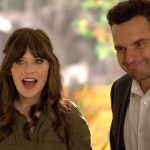 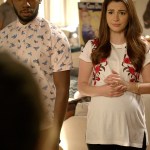 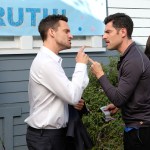 As the very last season of ‘New Girl’ kicks off there’s only one question on everyone’s mind: why hasn’t Nick proposed to Jess yet? Full recap ahead.

About three years later… literally… Jessica Day (Zooey Deschanel) has a nose ring. Oh, and she’s also still with Nick (Jake Johnson) so that’s good news! As the April 10 season seven premiere of New Girl opens, Jess and Nick are back from his book tour and blissfully in love. Meanwhile, Cece (Hannah Simone) and Schmidt (Max Greenfield) are still happily married and the parents to a gorgeous little three-year-old girl named Ruth. Lastly, Winston (Lamorne Morris) and Aly (Nasim Pedrad) are the next to welcome a baby as it’s quickly revealed that she’s seven months pregnant. In short, everything is great, wonderful, perfect and will most definitely not stay like this for the next eight episodes.

Quicker than expected, the entire episode turns into a why aren’t Nick and Jessica engaged episode. Cece is the first to express concern, followed by Jessica’s ex, Russell (Dermot Mulroney), who even calls out Jess for being too afraid to move forward in her relationship. That causes her to lie about being engaged, which leads Russell to approach Nick about it and obviously things get awkward. On top of that, Jessica’s dad calls Nick during the party to scream at him for not proposing while they were in Europe. Apparently he gave Nick his grandmother’s engagement ring six months ago, but Nick has always been planning on proposing in the loft since it’s the first place they met.

Once they finally get back to the loft, Nick finds the package from Turkey that has her engagement ring in it. He more or less forces her to start opening mail, and just as she’s about to open the envelope someone knocks on the door. Believe it or not, it’s Russell. Seriously? He shows up to talk to Jess in hopes she’ll want to come work for him. Nick is all about her taking the job, but also wants her to open the mail. Right when she’s about to open the envelope for the second time, Schmidt, Cece, Ruth and Winston all show up at the loft unannounced.

Nick tells Jess to open the mail in front of everyone, but before she rips open the envelope for the third time Jess tells him they don’t need to be married to be happy. This spooks Nick so he refuses to let her open the envelope. Ugh! After that, he calls Jessica’s dad to tell him he’s not proposing yet, so her dad gives him a timeline: he now has ONE MONTH to pop the question. So hold onto your hats, New Girl fans — this one’s gonna have to wait. Again.