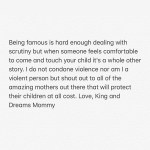 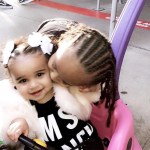 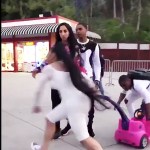 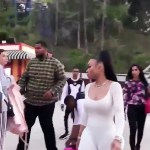 We never thought this would happen! Rob Kardashian and Tyga have teamed up against their ex, Blac Chyna to ensure the safety of their kids, Dream and King Cairo! You’ve got to hear this scoop…

The most unexpected alliance was just formed. Rob Kardashian, 30, and Tyga, 28, have put any differences they may have had aside to join forces against their ex, Blac Chyna, 29. The two doting fathers share the same concern over the safety of their children after Chyna got into an alleged verbal and physical altercation at Six Flags amusement park on Easter Sunday, April 1, while with her kids Dream, 1, and King Cairo, 5. Chyna and Tyga share custody of King, while Chyna and Rob share dream.

As we previously reported, Rob was “horrified” after seeing the now viral video of Chyna throwing a stroller at an unidentified person at the amusement park. He has already been on the phone with his legal team to discuss options about custody. Now, Tyga is doing the same, which has united the two unlikely friends. “Tyga is demanding changes for King’s safety after Chyna’s outburst. The latest drama brought Tyga and Rob closer together, and with the help of Kylie [Jenner, 20, Tyga’s ex], Tyga and Rob have been talking about how to best handle Blac’s out of control behavior,” a source close to the situaiton tells HollywoodLife.com EXCLUSIVELY.

“Tyga is demanding Blac make changes for both King and Dream’s safety and he is looking for help from Rob. They are discussing how to handle things with their lawyers and what their legal options are since they are both in the same spot with Chyna,” the insider reveals. “They want more custody or some other court ordered rules in place to insure that Dream and Cairo are never again in harm’s way. Tyga thinks Chyna’s latest actions are ridiculous and he wishes she could be a better role model.”

While the safety of the kids is Tyga and Rob’s main concern, there is something else they agree on, and that is who Chyna is allowing around their kids. “Neither Tyga nor Rob have met her new boyfriend, YBN [Jay Almighty, 18],” who was present at the park on the day of the scuffle, which “worried” both fathers.

“Tyga fears what King might be learning from the rapper or what bad habits and foul language King might pick up by listening to him speak,” the source adds. “Rob and Tyga haven’t heard anything good about YBN and that scares them. They know nothing about this guy outside of the outrageous videos they see of him online.” Now, the insider admits, Rob and Tyga are “pleading” with Chyna to make better choices, especially when the children are around.

Chyna has since taken to social media to respond to the incident at Six Flags. She claims someone approached her children at the park and felt comfortable enough to “touch” one of her kids. Chyna says it was her motherly instinct to protect her child.