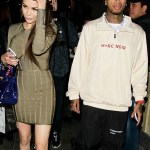 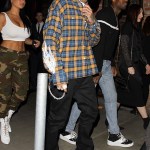 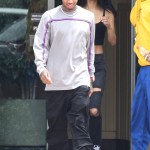 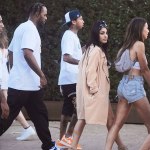 This is the strangest new couple alert we’ve ever heard! Tyga is secretly dating his ex, Kylie Jenner’s best friend, Anastasia ‘Stassie’ Karanikolaou, according to reports, which claim the evidence is in this single photo!

UPDATE: Internet goers claim the female in the photo is an LA-based hairstylist named Sivan. The photo was posted to her Instagram account on April 2.

Now, this is getting complicated. Tyga, 28, is reportedly dating his ex, Kylie Jenner‘s childhood best friend, Anastasia Karanikolaou, otherwise known as “Stassie” to online goers, according to multiple reports. However, the only evidence happens to be this photo [as seen below], where someone who looks like stassie appears to be spending time at Tyga’s CA home. In the below photo the blonde female is pictured alone in front of a pricey orange vehicle and a home, which appears quite similar to that of Tyga’s. A second photo shows the rapper posing in front of the same home and vehicle, pictured in female’s snap.

While the now viral photos have been creating romance buzz, there’s no clear proof these two are a couple. Neither Tyga nor Stassie have addressed or confirmed the dating reports. And, get this — It’s not even clear if that’s really Stassie in the photo! Not to mention, it’s also unclear where the photo even came from. Stassie is not tagged in the pic and it does not appear to be anywhere on her Instagram page. The only concrete fact about this is that Tyga is actually pictured in the second photo. He also posted the snap to his Instagram on April 1. Therefore, this is all speculation, for now.

And, like we noted earlier, Stassie has been friends with Kylie Jenner, 20, for years. Therefore, it’s unlikely she’d betray her, although Hollywood is an unpredictable jungle. To boot, Stassie just modeled in an ad for Kanye West‘s Yeezy Season 6 collection, which featured numerous models dressed to emulate his wife, Kim Kardashian, 37. So, it’s also unlikely that she’d want to burn that bridge, and that check. Nonetheless, we’ll keep an eye on this one!

Tyga’s been single, with the exception of running around with young models here and there, ever since his split with Kylie Jenner. They were on and off for years, having gone public with their relationship after she turned 18 in August of 2015. Kylie and Tyga dated on and off until their final split in March 2017.

Now, Kylie is in a relationship with rapper, Travis Scott, 25, who she just welcomed her first child with, a daughter, Stormi Webster, on February 1, 2018. The new parents recently celebrated Easter with her family, where they showed off their baby girl in these adorable, new photos.