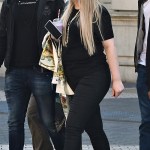 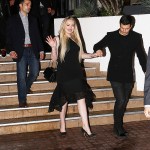 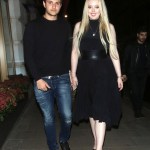 President Donald Trump’s daughters Tiffany and Ivanka exuded sophisticated sexy when joining him for a trip to Ohio to deliver a speech on March 29. Pics!

President Donald Trump, 71, took a trip to Richfield, Ohio on Thursday, March 29, where he touted his infrastructure plan. He was joined on the trip by daughter and White House aid Ivanka Trump, 36, as well his younger daughter Tiffany Trump, 24. Tiffany has rarely been spotted with her polarizing father since he took office in 2017. The sisters dressed to impress for the occasion as they braved a rainstorm on the tarmac at Cleveland Hopkins International Airport. Ivanka chose a beige sweater and slacks which she covered with a matching tench coat. She completely the look with a pair of stylish beige heels.

As for Tiffany, she opted for a dark blue coat with frilled sleeves over a black blouse for the rainy excursion. She also chose a pair of black capris and tan heels to finish off the ensemble. The Georgetown Law student took the opportunity to showcase her new longer bangs, which she expertly parted in the center, beautifully framing her face. Despite what you may think of the 45th President of the United States’ political views, he has some unmistakably gorgeous daughters!

This visit to Cleveland comes just hours after Trump formally bid farewell to his Communications Director Hope Hicks at the White House. The president made a big show of her departure. Walking her outside for all the cameras to see, giving her a handshake, a kiss on the cheek… and another handshake before sending her on her way.

The 29-year-old first revealed her plans to leave the administration on Feb. 28. Hope’s exit is just the latest in what has been a continual exodus of senior staffers since Trump became commander-in-chief, which is showing no signs of stopping. However, Trump’s sprawling family is clearly sticking by his side as he weathers battles on all sides.