Considering Chris Brown’s history of physical abuse, this is NOT a good look for him. The singer was photographed with his hands wrapped around a woman’s neck! What the hell?!

Chris Brown’s weekend party led into the early hours of Monday morning on March 26, but photos of his good time definitely look a little suspicious. Photographers caught the 28-year-old messing around with home of his gal pals, and in some shots, he even has his hands choking her neck! However, Breezy and the woman herself are insisting that they were just goofing around and having fun, according to TMZ. “She’s a friends,” Chris’ lawyer, Mark Geragos, tells the site. “It’s obviously playful, as she confirmed. Whoever invaded their privacy will be held accountable.”

Indeed, the mystery woman does seem to be laughing in most of the shots, although there are a few where she looks a bit more freaked out. Plus, another unidentified woman at the scene appears to be pushing the two apart at one point, as if she was worried that the horseplay was getting out of hand.  Other women were also seen in the photographs, although they don’t appear to have any involvement in whatever was going on. In most of the snaps, Chris is shirtless and enjoying the Miami sun, while the women are wearing bathing suits or cover-ups.

Chris plead guilty to felony assault in 2009 after he got physical with then-girlfriend, Rihanna, before the Grammys, which is why these new photos are cause for such alarm. However, it’s a different ex that was on Chris’ mind just recently — he went out of his way to comment on a photo of Karrueche Tran and her new man, Victor Cruz! 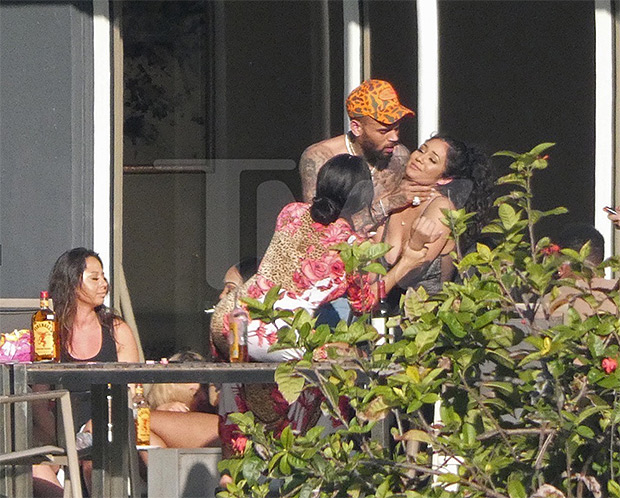 “They look really good together,” the singer wrote. Although it was a simple comment, it had everyone talking about how Chris still seems to be keeping tabs on his ex. Yikes!

UPDATE: Chris responded to the pics via Instagram on March 29. See his message above!