After leaving the Pepsi at home, Kendall Jenner, 22, decided to engage in some real protesting as part of the March For Our Lives. She joined Hailey Baldwin, 21, and Jaden Smith, 19, in Los Angeles, protesting for stronger gun control in the wake of the Feb. 14 massacre in Parkland, Florida. During her demonstration, Kendall took aim at President Donald Trump, 71. Taking a page out of punk rock’s book, Kendall wore a denim jacket that sported a back patch featuring the face of Trump with his mouth held shut by a safety pin. “God Save Us… He Ain’t My President,” the patch read.

Oooh. Of course, this is Kendall, so it means that this political expression is two things: fashionable and expensive. Kendall’s jacket was from R13’s SS 2017 collection, God Save America, according to Denim Freaks. It’s unknown how much Kendall paid for the jacket, but Farfetch lists an olive green shirt with a similar patch for $637. The sold out R13 God Save America fishtail coats go for $895. Huh. Nothing says rebellion like dropping more than $500 on a punk jacket. For those who don’t have half a grand for some anti-Trump fashion, Fat Wreck Chords sells t-shirts with the “Not My President” slogan for $15. Just cut it up and sew it to a jacket found at a local Goodwill and voila!

Still, with Kendall Jenner, perhaps it’s the thought that counts? After all, this is Kendall, who doesn’t really have the best track record when it comes to activism. It’s been nearly a year since she was dragged for starring in a Pepsi commercial that many called “tone deaf,” to put it lightly. The commercial showed Kendal solving police brutality by handing out soda. “If only Daddy would have known about the power of Pepsi,” Bernice King, the daughter of Dr. Martin Luther King Jr., tweeted after the disastrous ad hit the Internet. It was quickly pulled and Kendall was left mortified. 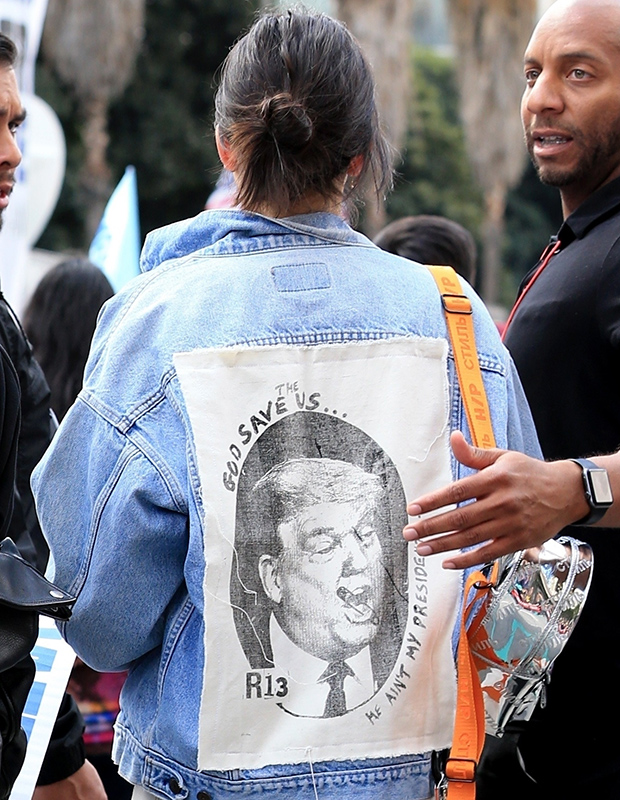 Imagine if Kendall Jenner knew about NOFX and Far Wreck? That would be weirder than Kanye West’s shirt featuring lyrics by The Pop Group (which really happened.) Regardless of how much money Kendall spent on her outfit, her support for the movement was sincere. “HUGS NOT GUNS,” she captioned a video from the march, uploaded to March 25. That’s a sentiment that everyone can get behind.