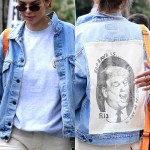 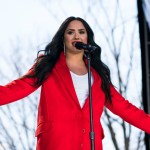 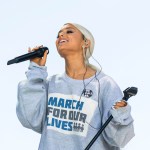 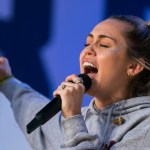 Miley Cyrus joined the millions who had #Enough. At the March For Our Lives, Miley took to the stage, performing her 2009 hit ‘The Climb.’ Watch her beautiful rendition here!

As hundreds of thousands gathered in Washington D.C. on March 24 to demand action on the rampant gun violence in the United States, Miley Cyrus, 25, was there to lend her voice to the cause. The “Wrecking Ball” singer was one of the big stars on hand for the massive event, to not only join in the protest but to also perform in solidarity with those calling for greater gun control. The Hannah Montana alum lent her own voice to the movement by singing her inspirational 2009 track “The Climb.”

She followed up her beautiful performance with a heartfelt message to the crowd. “Thank you for being here. I love you so much. Never again. You guys are so incredible,” she said. “I find myself lucky to be in presence of all of you wonderful people fighting for what is right. Love y’all so much, thank you.” Miley donned a grey sweatshirt with the phrase “#MSDstrong” written on it, paying homage to the high school student survivors who organized the event. She also held a “Never Again” sign, and had “peace” written on her face in glitter.

Organized by the survivors of the Marjory Douglas Stoneman High School shooting, which left 17 dead when the Feb. 14 massacre was over, the March For Our Lives was a way for all Americans to say they’ve had #Enough of the lack of action on gun violence in the country. “A march to get the entire country to unite under one cause — it is the ultimate show of prominence and support and just rage toward the things that have been happening in our country for so long,” Delaney Tarr, a 17-year-old survivor of the Parkland shooting, told Vox. The survivors were vocal that theirs would be the last mass school shooting in the U.S., a cause Miley was eager to get behind.

“Please support the powerful message of change, unity and healing from student survivors of the #StonemanDouglas shooting,” she tweeted on, March 16. “Listen to their song … be a part of the movement to help end gun violence!” Four days later, she tweeted that she would march during the event. “So inspired by the incredible students behind #MarchForOurLives. Can’t wait to join them in DC to perform and show my support. See you March 24th.”

Please support the powerful message of change, unity and healing from student survivors of the #StonemanDouglas shooting. Listen to their song #SHINE https://t.co/42iunNnGeD & be a part of the movement to help end gun violence! pic.twitter.com/di9QS6ugx2

Along with Miley, Ariana Grande, Jennifer Hudson, Demi Lovato, Common and rapper Vic Mensa were on hand to perform at the event. “I am completely inspired by the students and communities standing up for the future safety of everyone and to honor those we’ve lost from senseless acts of gun violence,” tweeted Jennifer, a person whose life was affected by gun violence, as her mother, brother and nephew were shot dead in 2008. “I stand with you and raise my voice with yours. #Enough.”