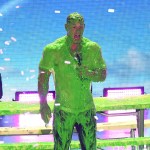 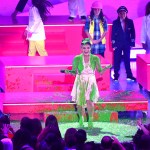 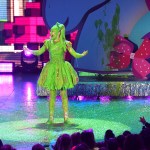 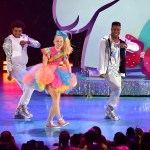 It’s the moment you’ve been waiting for! Find out who got slimed for the fourth time at the 2018 Kids’ Choice Awards!

At the Kids’ Choice Awards, it’s all about the slime, and this year’s show didn’t disappoint. In addition to Mel B and Heidi Klum’s epic slime moment, Olympic gymnast Laurie Hernandez also found herself with a face-full of green gunk! Following the super lit “You Can Do Anything” performance, Laurie was unexpectedly slimed. There goes her outfit! Before the slime, Laurie looked picture perfect in a baby pink satin dress. Let’s hope the stain comes out!

Nevertheless, it’s all about the fun, and Laurie was such a good sport! And even in all that gunk, she still looked flawless. How does she do it?! Aside from her Kids’ Choice appearance, Laurie has had a busy career. Not only did she win an Olympic medal, but she also won the 23rd season of Dancing with the Stars with her partner Val Chmerkovskiy. “I just want to thank everyone for their support and riding along this crazy roller coaster of my life. And, my goal is just to inspire others as I go on with my journey, and thanks for being there for me,” Laurie said after winning. She’s unstoppable!

It’s clear a little slime can’t get her down, and we can’t wait to see what Laurie does next. Take a look at the gallery above to see more celebrities like John Cena and YouTuber Liza Koshy, who also got slimed.