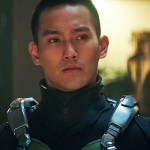 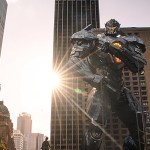 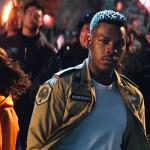 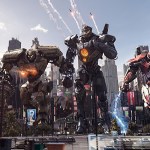 ‘Pacific Rim: Uprising’ is a ton of fun, but definitely has it’s faults. Read our review of the new John Boyega and Scott Eastwood film here!

Pacific Rim: Uprising relies on one premise: what if it’s the same as last time, but bigger? And while everyone loves seeing badass giant robots beat the sh*t out of gigantic, evil monsters from an inter dimensional realm, there has to be more to the story than rock ‘em sock ‘em. We open with a monologue by Jake Pentecost (John Boyega), the son of the late, great war hero Stacker Pentecost (Idris Elba). It’s been 10 years since the war of Pacific Rim, but everything’s still utterly sh*tty. Jake has to barter for Oreos, peddle spare Jaeger parts, and constantly evade getting beaten up by mobsters. Our introduction to Jake is somewhat like Han Solo’s reentry in The Force Awakens, or Star Lord’s post-song first adventure in Guardians of the Galaxy. Here’s a scrappy hero with a penchant for trouble, and — gasp — here’s an infinitely more qualified girl who has to help him.

Jake meets scrappy, spunky Amara (Cailee Spaeny), a 15-year-old street urchin with enough smarts to create her own mini Jaeger. She can operate it on her own, without needing a second, drift-compatible partner. But Jake’s insistence that he knows better gets them both captured by the police. Instead of sending them to jail, Jake’s adopted sister Mako (Rinko Kikuchi) enlists them both in the army. Amara’s all for it. Her glee arriving at the base is infectious; she knows the names and stats of every Jaeger, and she’s devoted to the cause. Something traumatic happened to her during the war, we learn, but it’s pretty much dropped when the Big Stuff (copyright me, 2018) happens.

You don’t really need to bother knowing anything else about any of the other characters, because the second half of the movie is all focused on what you probably bought the ticket for: jaegers smashing kaiju, and vice versa. Jake used to be a ranger before ditching his father’s lifestyle, as we’re reminded frequently by his frenemy/fellow ranger Nate (Scott Eastwood). But as soon as mayhem breaks out…guess who are drift-compatible again?? Cue extended sequences of Jake and Nate, Amara, and her fellow cadet-buddies participating in what looks like particularly intense games of WII tennis to move their city-destroying robot killing machines. Hell yeah!

In short, you get what you paid for. It isn’t an introspective masterpiece, it isn’t as good as Guillermo del Toro‘s first movie, but it’s loads of fun. Let ’em smash.