Unfortunate as it is, breastfeeding’s still a taboo. But stars like Pink & Chrissy Teigen have been vocal about normalizing it.

Many celebrity moms have been at the forefront of the public breastfeeding movement. Posting inspiring photos, words of encouragement, and their own stories of struggle, strong women like Pink, 38; Chrissy Teigen, 32; and Kristen Bell, 37, are huge advocates of feeding their babies whenever and wherever they have to — and we are feeling beyond empowered! In honor of Women’s History Month, we decided to highlight memorable moments of celeb moms sharing their own nursing experiences. From the highs to the lows, these stars have gotten REAL about breastfeeding! Click here to see gorgeous pics of celeb baby bumps.

Pink, who has two adorable children: daughter Willow Sage Hart, 6, and son Jameson Moon Hart, 1, has always been open about her journey with breastfeeding. In fact, the singer has shared multiple pics over the years of her nursing her children, and she has been very clear that she doesn’t care what haters have to say. “I think breastfeeding is healthy and natural and it’s a comfort to my baby so I can give a shit what somebody else thinks,” she said when Willow was still just a baby. During an album photo shoot in 2012, Pink shared a photo of herself nursing infant Willow. The next year, her husband Carey Hart posted an Instagram photo of his wife breastfeeding their daughter at a restaurant in Paris. She’s also shared pics of herself feeding Jameson, one standout image is of her nursing while on a hike. 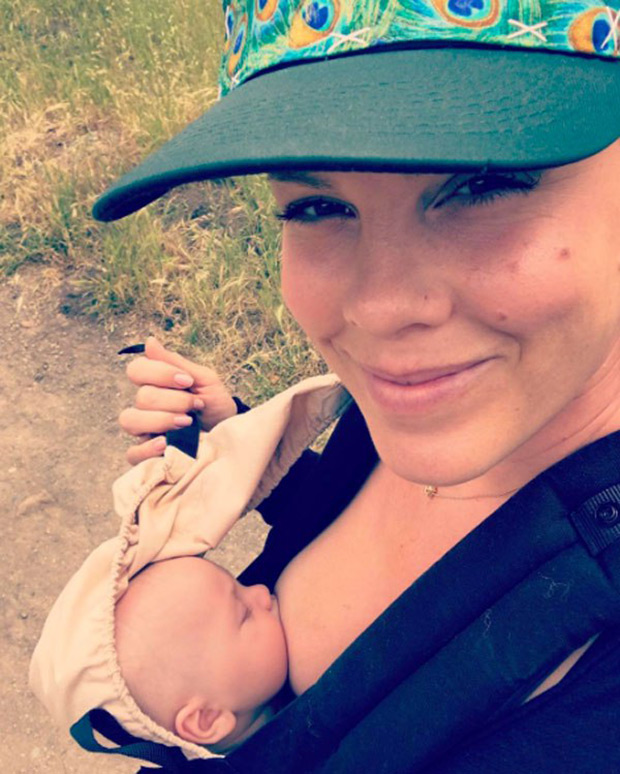 Not only has Chrissy posted multiple photos of herself proudly breastfeeding now 1-year-old daughter Luna Simone, but the model has also shared her personal challenges with nursing. “I just think it’s so funny. Sometimes I’m Googling how to do it better,” she shared with People magazine back in 2016. “I’m like, ‘Is it working? Is it taking? I don’t think I’m feeling enough pain!’ You just get so confused about how it’s supposed to feel, and as hard as anyone said it was, I feel like it somehow managed to be harder.”

We especially love how Chrissy appeared in Fergie‘s sexy “M.I.L.F.$.” music video shortly after giving birth, and in it, she’s breastfeeding her daughter like it ain’t no thing! Kristen is another celeb mom who has openly discussed and advocated for breastfeeding. When she hosted the CMT awards in 2013, the actress shared a behind-the-scenes look at her beauty routine. Yep, the mom was pumping. When people criticized her, she had the perfect response. “They’re just boobs!” she said. “Calm down. They’re under our shirt whether you’re looking at them or not.”

Take a look through the above gallery to see even more powerful photos of stars normalizing breastfeeding.