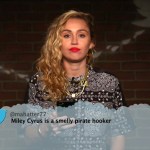 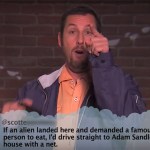 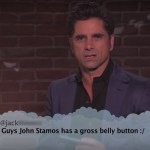 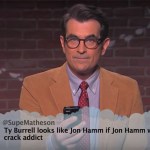 Ouch! Pink is known for her tough girl persona, but can she handle reading mean tweets on ‘Jimmy Kimmel Live!’? Watch!

It’s always entertaining to see your favorite celebrities get trolled by fans on Jimmy Kimmel Live!, and the March 6 episode was no exception. The Mean Tweet, Music Edition segment that featured Pink, Nick Jonas, and Fall Out Boy was truly hilarious, and you’re not going to believe how brutal the messages were. “Pink makes music for obnoxious white bridal parties that drunkenly walk into a Denny’s and ruin everyone’s evening,” a fan tweeted. Not taking the shade too personally, the “What About Us” singer clapped back with, “I would’ve said Waffle House, but whatever.” See, this is why we love her! Fall Out Boy came next, and brace yourselves because this particular tweet was ruthless. “Fall Out Boy is the Comic Sans MS of music. They are both entirely overused,” one fan said. So harsh, right? But, again the singers were completely unbothered and laughed off the diss.

Like we expected, Nick’s tweets were just as rough. “Nick Jonas was cute back when he was in the Jonas Brothers and now he looks like a ferret,” a fan tweeted. What?! We happen to think he’s still a hunk. Nevertheless, Nick’s feelings certainly weren’t hurt. After all, he’s probably used to getting backlash all the time. Since airing, Kimmel’s Mean Tweet segment has been a hit. Stars like Gal Gadot, 32, and Margot Robbie, 27, have also found themselves victims of trolling. “Gal Gadot? Imma be wondering why that woman got no t*tties,” one fan said about the Wonder Woman actress. Yikes!

But, the most exciting Mean Tweet segment of all time was Jimmy Kimmel’s birthday edition. On this particular episode, celebrities like Kim Kardashian, 37, and Larry David , 70, read some of their favorite insults about the comedian. “This is going to sound fantastic, but I forgot Jimmy Kimmel’s name so I googled ‘Ugly late night talk show host’ and I got him top link,” Larry read. We can’t get enough of this segment. For a good laugh, check out the full episode above!