Jane Fonda, 80, attended the Academy Awards on March 4, and looked youthful as ever as she hit the red carpet. The legendary actress wore a stunning white dress, and looked far younger than her 80 years in the gorgeous ensemble. Jane’s outfit showed off her incredible, thin figure, and feature long sleeves with small shoulder pads. She added a Times Up pin to the top left corner of her dress, continuing the protest of sexual harassment in the workplace, as stars have been doing all awards season long. She completed her look with subtle makeup, dangling earrings, a white clutch and Salvatore Ferragamo ‘Mirrors’ Sandal shoes from the Creations collection (available for $1,200.00). Flawless, for sure! This year, Jane is in attendance as a presenter, but she’s certainly stolen the show with her look!

Even though she’s not up for any awards this year, Jane is obviously no stranger to the Oscars — she’s been nominated SEVEN times at the ceremony! The 80-year-old won two Best Actress Academy Awards, for her roles in Klute and Coming Home in 1971 and 1978. However, she was up for that honor in 1969, They Shoot Horses, Don’t They?, 1977, Julia, 1979, The China Syndrome and 1986, The Morning After. She also racked up one nomination for Best Supporting Actress for her role in On Golden Pond in 1981. Not too shabby, huh!?

At this year’s Oscars, the most-nominated film is The Shape Of Water, with an impressive 13 nods. Behind that is Dunkirk, with eight, then Three Billboards Outside Ebbing, Missouri, with seven. It’s going to be a great night! 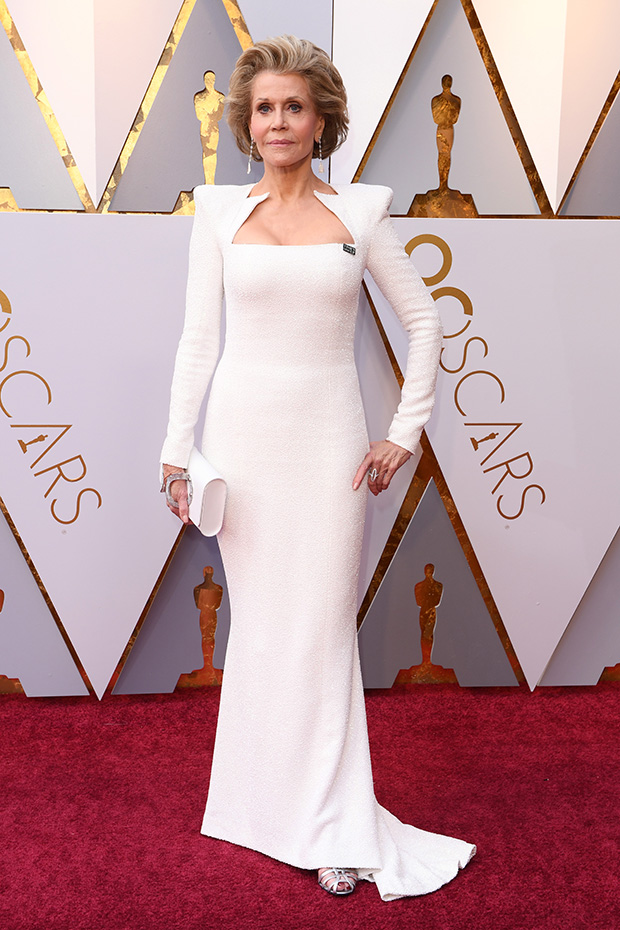