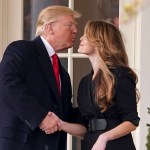 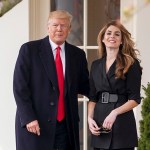 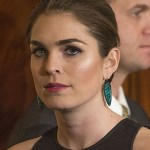 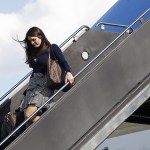 A vicious insult from President Trump may have been the last straw for Hope Hicks before resigning. Trump allegedly called Hicks ‘stupid’ the day before she quit!

Hope Hick‘s sudden resignation from the White House may be due to President Donald Trump berating her. Trump, according to an anonymous source who spoke to CNN, reportedly called Hicks “stupid” after her eight-hour testimony before the House Intelligence Committee. The source claims to be one of Trump’s “close allies.” During her testimony, Hicks admitted that she’s told “white lies” for the president as the White House communications director, but had never lied about anything regarding the investigation into Russian collusion.

Trump was reportedly livid when he heard this, and asked “how she could be that stupid” to say that she lied for him, according to CNN’s Erin Burnett. “Apparently, that was the final straw for Hope Hicks,” Burnett said. The White House has denied Trump’s comments. Hicks announced on February 28, the day following her testimony, that she would be resigning from her position at the White House, though did not state when she’ll formally leave. A replacement communications director has not yet been named.

If Trump did berate Hicks behind the scenes, he pulled it together for a glowing statement about her departure. He said, in part, that “she is as smart and thoughtful as they come, a truly great person.” Hick’s statement announcing her resignation praised the president, as well. “There are no words to adequately express my gratitude to President Trump,” she stated. “I wish the president and his administration the very best as he continues to lead our country.” Hicks was one of several people to hold the White House communications director role since Trump’s January 2017 inauguration, following Anthony Scaramucci (who held the title for 10 days), and Mike Dubke. Former White House press secretary Sean Spicer served as interim communications director at one point, as well.