After months of speculation, Cardi B finally admitted Offset cheated on her. She came clean in a new interview, where she also said that she ‘ain’t no angel’ either! Did she cheat too?

Cardi B, 25, is known to never shy away from the truth. However, when it comes to inquiries about whether Offset, 26, cheated on her or not, she’s remained quiet about the subject, until now. “It’s not right, what he f**king did,” she admits to Cosmopolitan as the magazine’s latest cover girl for its April issue [on stands March 6]. And, what she said next is ever more shocking than her first admission. “But people don’t know what I did, ’cause I ain’t no angel,” she said, alluding to the fact that she too cheated on the Migos rapper.

However, there’s more to the story about why she decided to stay with Offset amid the cheating drama. “It’s like everybody is coming down my neck like, ‘Why are you not leaving him? You have low self-esteem.’ I don’t have low self-esteem… I know I look good. I know I’m rich, I know I’m talented. I know I could get any man I want—any basketball player, football player,” she said, proudly. And, she understands that sometimes couples just need to stick it out and work things through. “But I want to work out my sh*t with my man, and I don’t got to explain why,” Cardi continued. “I’m not your property. This is my life…. I’m going to take my time, and I’m going to decide on my decision.” 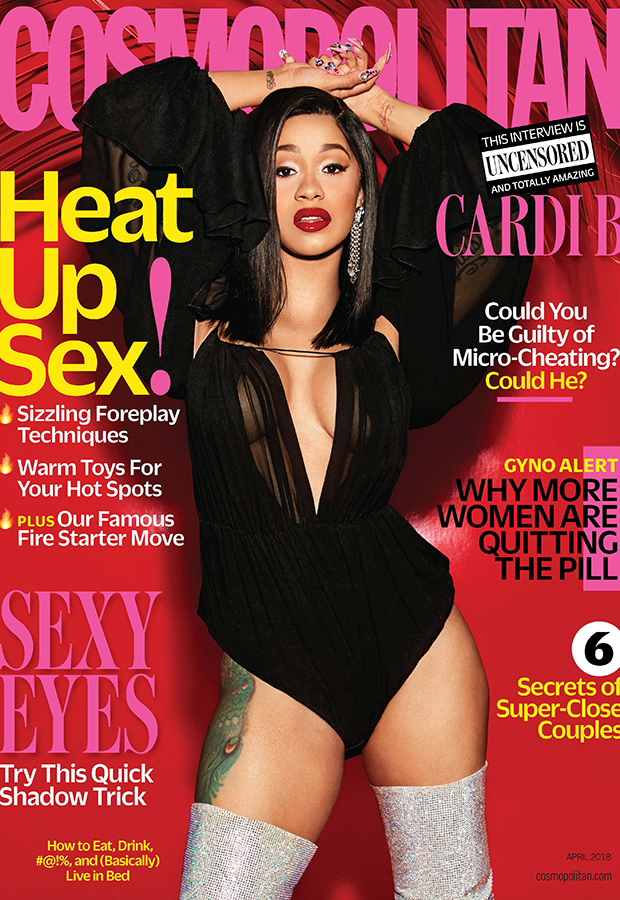 While Cardi finally shed some light on her relationship with Offset, it’s still unclear if the rapper cheated on her more than once and with who. As you may know, it’s been reported that Offset strayed on multiple occasions, with one woman coming forward to claim he is the father of her unborn baby. Offset was also at the center off an alleged sex tape scandal.

However, the couple has overcome all of the trials and tribulations their relationship has endured since he popped the question at one of her concerts in October 2017. Cardi B and Offset have not released any details about their upcoming marriage, and it’s probably because they haven’t even started planning their big day yet. Offset recently admitted that they don’t have time to plan a wedding just yet.

Despite Cardi’s shocking admissions about infidelity, she told the mag that she’s not changing for anyone. “Everybody got different beliefs and different religions and were raised differently, yet you also supposed to be careful you don’t offend somebody, ” the rapper explained. “Everybody gets bothered about everything. Everybody got a f**king opinion about you. If I change myself, then I’m going to lose myself, and I won’t be who makes me happy.”

HollywoodLifers, are you shocked the rumors that Offset cheated turned out to be true?