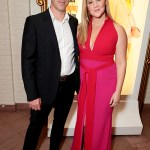 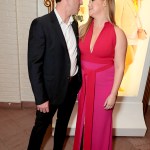 Amy Schumer didn’t hold anything back when she revealed some hilarious details about her wedding vows during a recent podcast interview. Get the details here!

New wife Amy Schumer, 36, married husband Chris Fischer, 37, in a surprise ceremony on Feb. 13 and in an upcoming episode of her comedian friend Nikki Glaser‘s new SiriusXM podcast, she opened up about the incredible details of the big day, including her X-rated wedding vows! “I’m a wife as hell,” Amy said on the show. “But it’s still like, a novelty. Somebody went to sit next to [Chris] and he’s like, ‘My wife is sitting here,’ and then I got back and he was excited to tell me that he said that. I just have been really overusing it to a degree that’s insane. Like, when it’s completely uncalled for.”

As the conversation continued, Nikki talked to the talented star about the romantic words she and Chris used during the ceremony and Amy didn’t hold back on the details of their nontraditional vows. “Mine sucked!,” she admitted. “I thought mine were good, I wrote mine in like, 20 minutes. I was crying when I wrote them, but his blew me out of the water so hard.” Nikki, who was at the wedding, responded to Amy with a funny memory. “I remember a joke from yours,” she told the newlywed. “You go, ‘You make me laugh, you make me smile, you make me feel loved, you make me food.’” Amy then elaborated further on the exact words. “In my vows I go, ‘But I promise I’ll keep going down on you, even though everyone tells me I won’t,’ she hilariously revealed. “And his were like, heckling me too. He was like, ‘The other day I lost a tennis match and you called me a f**king loser.’ It was all like, awful sh*t.”

Amy’s comedic flashbacks of the vows prove why she’s such a successful comedian. She went further in the conversation with Nikki and jokingly talked about how horrible of a wife she is to her chef husband. “All his stories about me that were supposed to be endearing were about me screaming at him,” she continued. “I just annoy him all day. I’ll be like, ‘Do you want to play a game?’ and he’s like, ‘What?’ And I’m like, ‘Guess how many times I sneezed today?’ And like, that’ll be the game. And he’ll be like, ‘Three.’ And I’ll be like, ‘Don’t remember!’ And he’s like, ‘I’m spending my life with this worthless monster?’”

Amy’s full interview will be available on an upcoming episode of SiriusXM’s You Up With Nikki Glaser.

HollywoodLifers, what do you think about Amy’s wedding vows? Let us know in the comments!