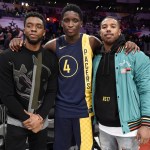 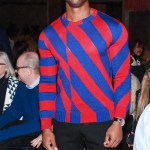 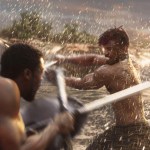 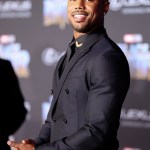 After a fan decided to mouth off about Michael B. Jordan’s family, the ‘Black Panther’ star quickly silenced the fool.

“Michael B. Jordan is a 5’9” adult man that loves anime [and] lives with his parents. Y’all told me all of those things were unacceptable though,” twitter user @Chrisfrom_216 tweeted on Feb. 21. It seems this man was getting tired of how everyone is mentally dating Michael, 31, after he stole the spotlight in Black Panther. It didn’t take long for Michael to clear up a few things. “First of All I’m 6ft and they live with ME, put some respeck on my name. LOL…aaaand goku & naruto are real ones lol”

Dead. Of course, the entire nation of Wakanda chimed in, including Chrissy Teigen. “Yes, I’m sure those are the ONLY differences between you and him lol. Or rather the only two similarities. I’m tired goodnight sorry goodbye.” Another users, @Tifanishanese, said “He must be doing something right to have so many men clowning and posting about him.” Some fans just kind of laughed off this one guy, while others were happy that Michael threw his support behind Naruto and Dragonball Z.

It seems that with success, the number of haters grows 100x. However, long before Michael’s turn as Erik Killmonger, he had to deal with some of the noise directed his way online. During the 2016 winter holidays, some troll decided to flood his Instagram with explicit comments that claimed Michael was gay. “Look, whoever’s angry, bitter, upset for whatever reason, grow the f*ck up ‘cause karma’s real,” he said. ”And I usually take the high road. I usually don’t say s**t, I just let it roll ‘cause people are going to be people. Everybody they opinion. That’s what the Internet’s for. They going to say whatever.”

First of All I’m 6ft and they live with ME, put some respeck on my name. LOL…aaaand goku & naruto are real ones 🙌🏾 lol https://t.co/QspyHD2zwH

Or rather the only two similarities? I’m tired goodnight sorry goodbye

It doesn’t matter what Michael’s sexuality is. The dude is an incredible actor. However, because of his natural chemistry with his Black Panther co-star, Lupita Nyong’o, 34, many fans are hoping these two would become more than co-stars. “The romcom isn’t dead it’s just evolved into every single picture of Lupita Nyong’o and Michael B. Jordan in the same room,” one of the many shippers tweeted. Well, if Lupita into anime, maybe this romance has a chance?

HollywoodLifers, what do you think of Michael’s reponse to the fan’s tweet?