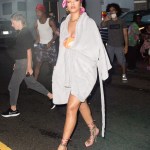 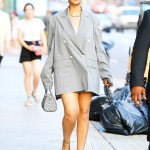 Chris Brown and Rihanna still share one thing: a dislike of Wendy Williams. We’ve got EXCLUSIVE details on how she’s got his back at his ‘karma’ slam.

Talk show host Wendy Williams, 53, shocked fans on hr Feb. 21 show when she revealed that her doctor told her to take three weeks off from work immediately to deal with her complications from Graves disease. That means no dishy Hot Topics segments and singer Rihanna, 30, is fine with that. As we previously told you, her ex Chris Brown, 28, thinks her illness is “karma” for bashing celebrities over the years and RiRi agrees.

“Wendy has dragged Rihanna many times over the years and said some pretty unforgivable things. Like the time she said Rihanna’s ‘not girlfriend material.’ That really upset her. She’s still holding a grudge against Wendy over it so you can trust Rihanna has Chris’ back. They don’t agree on much anymore, but when it comes to their disdain for Wendy Williams they’re definitely on the same page,” a source close to the “Work” singer tells HollywoodLife.com EXCLUSIVELY.

Wendy has gone hard on RiRi over the years. Back in 2015 she declared that,”I don’t think anybody but Chris has been serious about Rihanna. Rihanna is like, you hit the skins and scram.” She then went super low, insinuating that Ri might have an STD! “Rihanna is not girlfriend material. She’s hot, she’s sexy, you do her, then you take your penicillin.” Yikes!

In 2016 Wendy went in on the singer again, declaring that she will never be a legend like Beyonce, 36. “Rihanna will not be a legend. Nope! Beyonce will do her residency in Vegas at 55-years-old and you will go see her,” she stated. “Rihanna will attempt to do it. Rihanna is good for right now, but she’s not a legend. Nor will she be.” Brutal!

As we previously told you, Chris isn’t going to miss Wendy’s absence from the small screen at all. “Chris feels bad Wendy is suffering an illness, but he can’t help but think bad karma is to blame for her poor health. Chris has been the target of Wendy’s criticism and judgement many times over the years so he has a hard time feeling too bad that she will be off the air for a few weeks. Chris is a big believer in the energy in the universe and he thinks cosmic karma may be partly to blame for Wendy’s problems,” a source close to the singer told us EXCLUSIVELY.

HollywoodLifers, are you going to miss watching Wendy now that she’s on a three-week health hiatus?